Lavar Edwards is tired of hearing about the bad things going on in Camden, New Jersey.

Edwards, 38, was born and bred in this hardscrabble town along the Delaware River, a stone’s throw from Philadelphia.  “There are ambitious and proud people here, but that’s never what you hear about.”

Despite its reputation as one of the poorest and most crime-ridden cities in America, Edwards has hope to spare for the young people in his hometown.  Hope that he turned into action with his founding of the Camden Clock Chasers, a city track team that welcomes kids of all ages, shapes and athletic abilities into its fold. 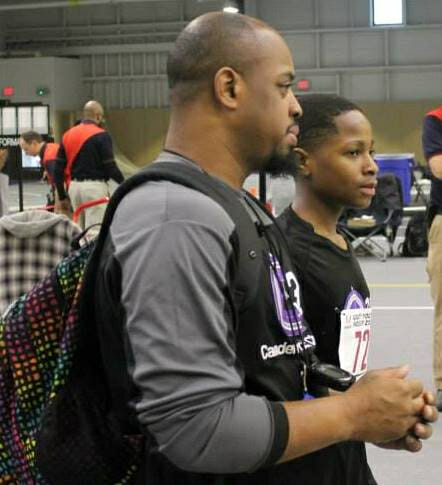 Edwards and one of his athletes, Irrian, prepping for a race.

Edwards works as a behavioral specialist with Camelot Alternative Education at Woodrow Wilson High School, where he ran track when he was a kid.  “The impact that the coaches had on my life was incredible,” he recalls.  Which is why he and his fellow coaches volunteer after school and on weekends to work with 120 kids, most in the 5-17 year old range, mentoring, encouraging and giving each child individual attention.  “We never turn a kid away even if he isn’t fit and athletic,” Edwards says.  “Our goal is to create character, to set goals and accomplish them, until the accomplishments get bigger and you start to get that snowball effect.”

The team is named the Clock Chasers because he tells his athletes that the only real competition is between them and the clock. “I don’t focus on winning, it’s all about self improvement.”  But win they do – Camden Clock Chasers’ first appearance at the AAU Junior Olympic Games resulted in nine athletes finishing in the Top 20 in the nation in their respective age groups and two earning All-American status.

Edwards, who describes his kids as “a beautiful blended combination of ethnic backgrounds,” is driven to make each child feel important – “one of the most rewarding jobs on the planet.”  From being sure the kids have healthy food options to listening to their problems and helping with homework, Edwards puts his heart and soul into his coaching.

The Clock Chasers don’t have any big corporate sponsors, although the community does what it can to help subsidize scholarships for the kids who can’t afford the registration fee. “Nobody gets turned away.”

The goal of creating outstanding student athletes prepared to go on to the next level of their life and education is paramount to Edwards and his fellow coaches. And it’s not always easy – sometimes the kids act out for a variety of reasons.  Edwards’ mediation training  often comes into play.  “We say, if we don’t understand why a child is acting a certain way, their perception many not be our reality, and we can’t forget that. I believe in these kids, and they know that.”