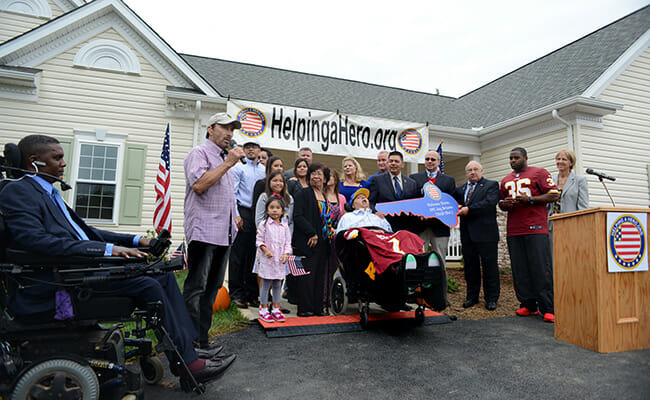 Country music legend Lee Greenwood has a voice, and a heart, for service. As the national ambassador for Helping a Hero, he flies all over the country to perform and present wounded soldiers with keys to new, handicap-accessible homes. He is also a spokesperson for Disabled American Veterans, “Products for Good” and the Honor 1 Campaign. Lee has performed his iconic 1983 hit, “God Bless the USA,” at numerous charitable events throughout his career, including a performance at New York City’s Yankee Stadium just a few days after 9/11.

“You will never be disappointed with service to others,” said Lee. “It’s a feeling like no other, and it gives your soul peace.”

We asked Lee about what giving back means to him, what inspires him and how he’s used his musical talents to inspire others.

I grew up in a family who valued America and am inspired to volunteer because I was taught to always help others. I count it a privilege to be in a position to brighten a veteran’s day or help unite the country after a tragedy like 9/11. I was raised by my grandparents and we were sharecroppers. Even though we didn’t have any money, I always believed anything was possible in America. I worked hard and started my music career when I was only 14 years old. One of my first gigs was with the USO.

I am humbled by the men and women who serve in uniform and today, it is an all-volunteer military. I think every day about these heroes who deploy away from home for a year even two at a time. Who miss important milestones, like the birth of a child, to protect the freedom we hold so dear. It makes the days we are away from home on our country music tours pale in comparison. That is why I have done more than 30 USO tours, and will continue to do so.

My dad served in World War II and I thought back to how everyone said, “I’m proud to be an American.” But I hadn’t heard that phrase in decades. When I wrote the song, “God Bless the USA,” I wanted to tell the story of growing up in America, of the pride of service and sacrifice, and the blessing we have of living here in the United States.

Our active-duty military and our wounded warriors are committed to protecting and preserving America. These wounded warriors face real daily challenges in their new normal. Many are missing limbs, facing PTSD and dealing with daily pain. It is my honor to present the keys to a specially adapted home through Helping a Hero, or serving through Disabled American Veterans, or honoring our Medal of Honor recipients. I volunteer because “I am proud to be an American,” and I’m inspired by their stories of service and sacrifice. 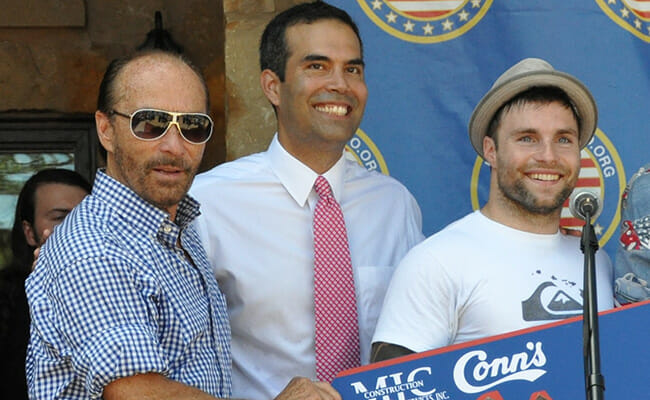 My wife and I are very committed to giving back. We have raised our two sons to help others and to always be aware of things you can do for those who need your help. Every American is blessed to live in the greatest nation in the world, yet we still have so many needs.

What makes music a powerful tool for change?

When I wrote “God Bless the USA” in 1983, I never imagined it would become what it is today. I was in the back of my touring coach going from one show to another all across the country. I wanted to express my feelings for the United States in a way to bring the country closer together. I included the men and women who sacrifice and even die every day to keep America free. Those simple lyrics have changed America, and I know they have changed me. Unity is hard to acquire in a nation of diversity, but I will not stop believing in this country.

After 9/11, when I walked onto the field at Yankee Stadium in New York City to sing “God Bless the USA,” there was a powerful moment when America was united and “God Bless the USA” became a cry from the ashes of where the Twin Towers once stood. Music does change people, and does allow people to reflect on the journey that brought them to that moment.

What’s been the most rewarding part of your volunteer work?

The most rewarding part of being involved with the various charities I work with is to meet the people whose lives we impact. I have been able to sing at welcome home ceremonies, and it is always emotional. The one I attended for SSG (Ret) Brian Mast, United States Army, was particularly impactful. Brian lost several of his close friends in Afghanistan and became a double amputee after an IED blast took his legs. At his key ceremony, tears were streaming down his face as he held his 2-year-old, thinking of the soldiers who never made it back. Brian shared with me how much it meant to him to hear my song when he was deployed, and to know America stood with them and was supporting them. Because he lost both legs in Afghanistan, he was standing on his prosthetics, saluting the flag, and said, “I am proud to be an American, thank you for writing that song and for inspiring our nation to unite.” My heart burst with pride while at the same time, imagining how his life will be in the coming years.

When we were attacked on Sept. 11, 2001, I was in Los Angeles on business. I couldn’t come home or travel anywhere because they’d grounded all planes. I asked my manager to call New York and find out what they needed me to do for them. Mayor Rudy Guiliani said they were putting together a firemen’s memorial and a police memorial, and asked me to come to New York City as soon as they could put a plan together. I went with my wife, Kim, and sang “God Bless the USA” for the families at Yankee Stadium for the firemen who were lost, and the policemen’s memorial at Carnegie Hall. I also sang at the fourth game of the World Series in New York. This started two years of non-stop touring to lift the spirit of America. Our country was in need of hope. People wanted to see my heart, to see if I actually represented the cross-section of Americans that I wrote about. I sang across the country, everywhere I could possibly sing.

I hope people know that I believe in America and I hope they will be inspired to stand firm and say, “I am proud to be an American.”