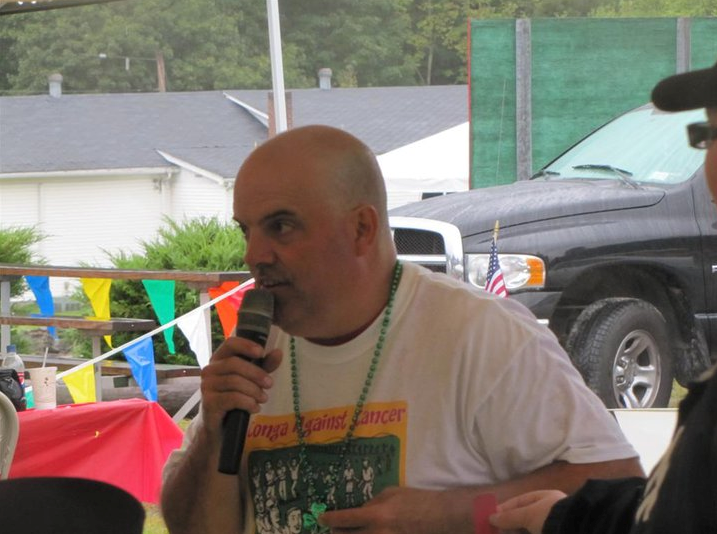 If it weren’t for his volunteer service at a local radio station in his small town of 3,000 people, Lou Monteleone might never have discovered his life’s passion — helping children stricken with cancer.

Over a decade ago, he experienced his first St. Baldrick’s event — a fundraiser where people shave their heads to support children who go bald during cancer treatment. That’s when it hit him — these kids could benefit from knowing other adults and children stand with them. To demonstrate that solidarity, he started the Line of Hope. It’s an annual event where people stand together, holding letters that spell the names of children currently battling cancer or those lost to the disease. It’s a way of honoring their struggle.

Over the last seven years, Lou has spread word of Line of Hope to all 50 states. Points of Light talked with him about his volunteer service.

What made you first decide you wanted to volunteer with St. Baldrick’s?

I volunteered for a local radio station for 10 to 12 years, and I covered the St. Baldrick’s event. I’d never heard of it before, and it was pretty new. They weren’t a foundation at that point. That’s when I learned what it was and saw pictures of the children with cancer. A light bulb went off, and even though I was volunteering elsewhere, I knew this would be a big part of what I would do. It’s heartbreaking to see children go through this. The cause of shaving heads is to be in solidarity with a child. A lot of children feel like outcasts, and they don’t want to be the only ones losing their hair. 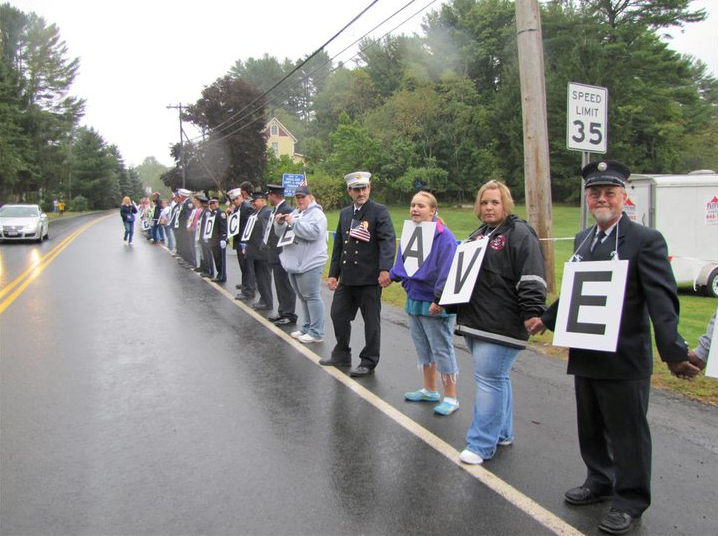 How did that morph into Line of Hope?

I’m originally from Brooklyn, but I moved to the country at age 11. I’ve been a country guy now for most of my adult life. When I decided to do St. Baldrick’s in my town, it was a little tough. My town has a few thousand people, and the thought of shaving heads didn’t catch on like it does in a bigger place with a lot more people. It was discouraging when I tried to get my message across on what this was about and how we could put it together. So, I switched gears to get people to gather in solidarity with children and to honor them. I determined when we stood in a line for these kids, we would get the same point across. People don’t have to shave their hair and more people to come out. So, that’s how it started.

The first year, we had 60 people in my hometown, Eldred. We made letters of the children’s names who were fighting cancer or who lost their battle. Some people held letters of words of encouragement, such as strength, hope, or courage. It was a nice Sunday afternoon in September — the month for childhood cancer awareness. It just fit.

I have a business called The Corner in the center of town. I thought if we could line up people as the traffic goes by, it would make a statement. People really got into it. They gathered, I played a few songs, they stood and held hands and had letters that spelled out the children’s names. They made a donation of $5 per letter. It was emotional and powerful.

I did it for a few more years in Eldred, and it got bigger. So, I wondered if I could spread it around the country and have everyone come together for an hour on a Sunday. I thought it would be awesome to achieve that. But, I wasn’t sure how. Social media came to mind. I started using Facebook, Twitter, and Instagram. In 2013, we had the first cross-country Line of Hope. That first year, I spent hours after work and early in the morning just putting in key words like cancer, children’s cancer, touched by cancer to find groups who would be interested raising money for cancer treatment. It clicked, and I started reaching people I’ve never even met. 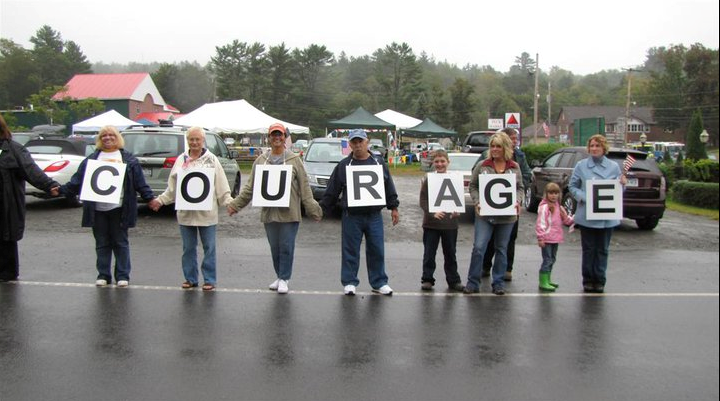 That first year, we had maybe eight states. Then, it grew to 12, then 16. By 2014, we were in every state. This was all strictly through social media, and some people who knew a lot of people who wanted to get involved. It’s easy for people to make a $5-$15 donation. Donating time is harder, and sometimes people just need a little push to do it. Some don’t want to try to do something and fail, but we’ve shown them they can do this. I get pictures and videos from across the country. It really solidifies the whole thing when you see a video of total strangers in the middle of the cornfields of Iowa or the mountains of Alaska, and they’re standing together for 25 minutes.

It doesn’t have to be anything big. It can be just a few people, even just one child’s name. A mother and father with their children and dog, holding letters in their backyard. Things took off once people realized they didn’t need a big event. People gathered a few friends and do whatever, wherever. Some people have taken it further with music and food, but you don’t have to. I tried to set the example by making a whole day out of it, but people are limited by what they can and can’t do. Sometimes you’ll see four to six people, sometimes 30 to 50 people in a line.

The one goal was to stand together and raise as much money as we could to show children support them and to not give up until they’re better. It’s been a rewarding experience for me. I’ve done a lot of volunteer stuff before, but this one — to start from a little town here — proves you don’t need a lot of money or a huge city to succeed. If you have an idea that you’re passionate about, just do it and stick with it.

Describe how Line of Hope works. How do you get people involved and what do you do?

On average, people stand together for about an hour. Some make an afternoon of it. Some years certain states are more involved than others. We tell organizers to get as many people as they can, but we know how difficult it is. We’ve reached a few thousand people over the years. Each family has their own personal story of why they’re getting involved. Some honor five or six children, and others don’t have anyone in particular to honor, but they’re involved and hold up words of encouragement. Sometimes, there are multiple events in the same state. It’s a lot harder for people to do major events in their states than it is for me here. I have resources I can tap into. We’ve incorporated head shaving since 2010. We have the Line of Hope and the Congo against Cancer. We also have the Pinwheel of Hope that we light up at night. I make a whole day of it here, but across the country, they might do a barbecue in their backyard. It’s all about coming together for a cause.

What impact have you had so far?

We’ve raised $121,000 over the past seven years. That’s a lot of money for the Catskills. I hope to raise more as time goes on. It’s time consuming, but I’m passionate about it. If we don’t get all 50 states, 25 to 35 is fine. That’s not going to deter me from continuing to try to get the country together. Any cause that gets people together for the day or the afternoon is a positive thing. This is one where we can stand together for children.

Why do you think it’s important to volunteer?

It’s a sense of accomplishment. There are so many people who need help in this country. We lose track that there are people out there who struggle. If you don’t help them, who will? We’re here to connect with other people and give back to them a little bit. If we can bring people together, we can help give them self-confidence. It makes a difference when people see others helping for no monetary gain. Just like working with EMS or being a firefighter or in law enforcement, if you help people, it’s a feeling you can’t put a price on. Most people just need a push in the right direction, and they’ll be surprised by what they can achieve. As humans, we should be as compassionate as we can be.

What do you think your future endeavors will be?

I’ll keep plugging away. I’ll keep working to make the group bigger. I’m looking for more places and people. If other areas had more resources, they could get involved, and I think this could be much larger. Once I got all 50 states involved, I created the Message of Hope. I wasn’t sure how it would go, but I got all 50 states to hold letters. Then, I asked them to do one more thing. I asked St. Baldrick’s to give me 50 words they would like to say to 1 million people — something on behalf of the Foundation’s work for childhood cancer. I asked the representative to send it to me via email, and I took each words, mixed them up, and assigned one word per state. After they stood together and took pictures, I asked them to pick a few people to hold the other word. They took a picture of one or two people holding the word and emailed it to me. I got all 50 words back, and I took them and made a video, putting them in the proper order. Separately, they don’t mean anything, then you see a woman in California holding “the” and a girl in Pennsylvania holding “children.” There’s someone from every state, and it all comes together. It quite something to see.

Do you want to make a difference in your community like Lou? Visit All For Good to find local volunteer opportunities.