After teaching for over 10 years in urban schools, Nicki Williams-Rucker realized reoccurring problems that continuously affected her students.  Upset with the wide range avoidable patterns that her student’s were facing, Rucker decided that she would set out to make a change for students that would extend farther than just the classroom.

My Sister's Keeper of Chicago  (MSK) is an initiative that Williams-Rucker started based off her realization of increasing drop-out rates and unplanned pregnancies the summer before college.  For the past six years, MSK has been an organization that prides itself on providing urban girls with the tools they need to become stronger young women and future leaders. 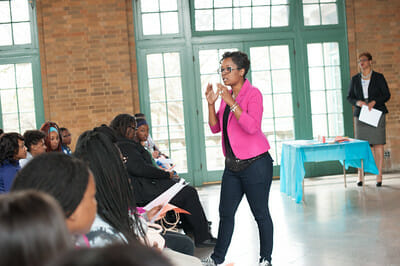 Williams -Rucker speaking to a group of future leaders

The program offers year long, in school, curriculum-based programming to 10th-12th grade students, as well as hands on workshops that are based on the Illinois State Common Core Standards. The organization also includes four other programs aimed at helping young women, including a mentorship program entitled Lifting as we Climb On-on-One. The program designed to increase retention rates amongst MSK graduates, pair graduates with women from various professions to encourage and help students.

Since the start of her program there has been a noted 75% increase in sense of self-esteem amongst participants in middle and high school. There has also been an increase in college acceptance and interest amongst her senior high school student, as well as a 91% increase in media messaging awareness and an 85% increase in positive/healthy relationships amongst peers and teachers. Parents have also reported a positive change from their children even with skills such as resume writing and interviewing.

Despite the declining funding for after school programs for many Chicago area schools, Williams-Rucker is doing her best to ensure the sustainability of MSK and the message it provides to young women