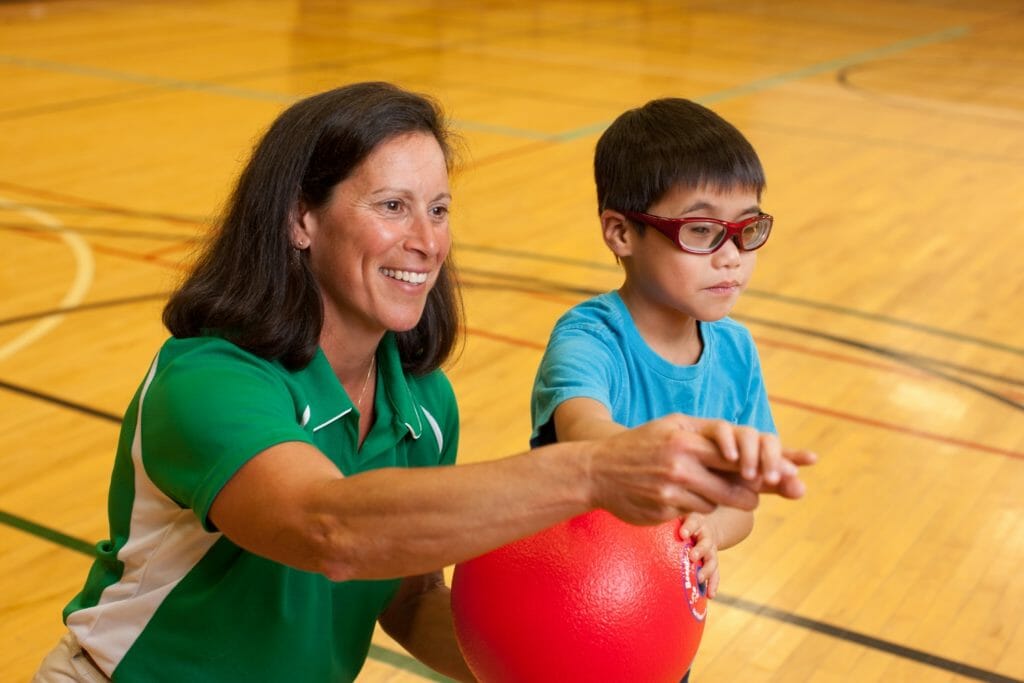 “My dream is for all children with visual impairments to have access to Camp Abilities activities that are close to home,” says Lauren Lieberman, the force behind the educational sports camp she founded for children who are visually impaired, blind, or deaf-blind. “Oftentimes, children with visual impairments don’t have opportunities to be with other youngsters who share their circumstances. Through Camp Abilities, they meet children who not only appreciate their challenges, but celebrate in their successes and provide empowerment.”

As a physical education student in the 1980s at West Chester University in Pennsylvania, Lieberman volunteered to work with Ski for Light, an adapted recreational program for adults with visual impairments. A chance encounter teaching cross-country skiing to a woman proved to be pivotal. “Lauren, I never could have done this without you,” said the grateful participant. It was then that Lieberman realized her calling. She later taught adapted physical education at the Perkins School for the Blind in Watertown, MA; eventually received her Ph.D. from Oregon State University; and came to The College of Brockport near Rochester, New York, in 1995 to devote her life’s work to helping individuals with visual impairment reach their highest physical potential. A year later, she established Camp Abilities, welcoming 27 children to the first weeklong program that offered such athletic activities as swimming, track and field, gymnastics, tandem biking, and beep baseball.

The camp has grown through the years, though Lieberman hopes one day all 59,000 visually impaired children in the U.S. will attend a Camp Abilities and later participate in after-school and community-based sports programs. “Through sports and physical activities, the lives of visually impaired children can be significantly impacted,” says Lieberman. “Not only do they gain confidence in discovering a newfound athletic skill, but they take pride in participating in an activity enjoyed by their sighted peers.”

Lieberman recognizes that children with visual impairments aren’t the only ones who reap the benefits of a Camp Abilities experience. Lieberman has engaged scores of students from The College of Brockport as well as universities all over the world to work as counselors at Camp Abilities. “Teaching college students how to work with visually impaired individuals cannot be done in a classroom using a textbook,” she says. “Proper training requires students to have hands-on experience with persons with visual impairments.” Upon graduating, many of her college students have established Camp Abilities in other communities and trained others in the program as well.

Lieberman epitomizes her motto, “Believe You Can Achieve.” Since the program’s founding, she has planted 19 Camp Abilities in 16 states in the U.S. and an additional seven camps abroad. Each camp welcomes approximately 25 to 55 children annually. Many of the programs have expanded to include sporting activities for participants throughout the year.

Lieberman recently produced a How to Start a Camp Abilities manual, which includes grant applications, timelines, medical forms, and more. The manual allows new camps to be established more quickly and efficiently. In addition, working with the American Printing House for the Blind, Lieberman has produced adapted physical education kits that can be used by teachers and families in implementing sports activities. The Run/Walk Fitness Kit, for example, 45 comes with a guide wire, tether, and talking pedometer, along with an instructional manual, and is free to any child with a visual impairment.

Lieberman is a Distinguished Service Professor, the highest ranking in the State University of New York system. In addition, she is the recipient of the 2016 Warren C. Bledsoe Award for literary achievement for a book on physical education for visually impaired people. In 2015, she was inducted as a fellow of the International Federation of Adapted Physical Activity in Netanya, Israel. In 2012, she received the esteemed Access Award from the American Foundation for the Blind.

Lieberman has trademarked the slogan “A Loss of Sight—Never Loss of Vision.” This visionary spirit is felt by lives impacted by Camp Abilities. During the 2016 Paralympics in Rio, one of the leading swimming contenders was 21-year-old Martha Ruether, who came to Camp Abilities when she was 12 and learned to swim with the help of Lieberman and other counselors. Another inspirational story is shared by Jason and Lori Bennett, who credit Lieberman for their daughter’s metamorphosis: “Lauren has created a camp that has given Madison a place to be independent, gain confidence, grow in maturity, but most of all, a place to belong where everyone is just like her. Her dream was to be on a sports team for her school. This year, with the confidence and skills she learned at Camp Abilities, Madison’s dream came true. She made the track and field team! Madison believes she does not have a disability; she has a different ability.”