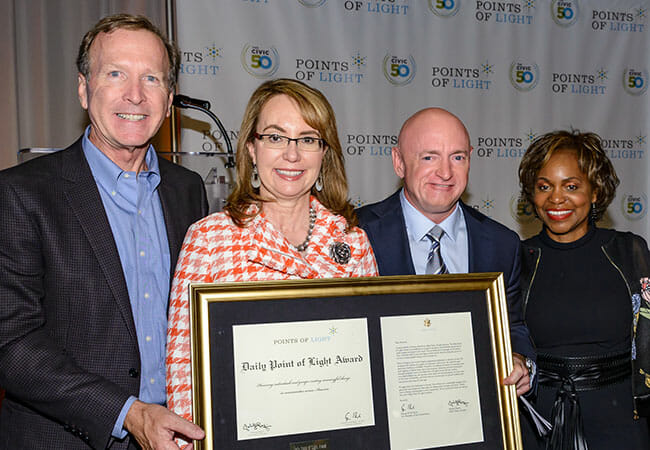 Congresswoman Gabrielle Giffords and her husband, Navy combat veteran and retired NASA astronaut Capt. Mark Kelly, have dedicated their lives to service. The youngest woman ever elected to the Arizona State Senate, Rep. Giffords spent more than a decade representing her community first in the state legislature and then in Congress. As a naval aviator, Capt. Kelly made two tours of duty and flew 39 combat missions, before becoming a NASA astronaut – flying four missions and spending more than 50 days in space.

On January 8, 2011, at a “Congress On Your Corner” event in Tucson with her constituents, Rep. Giffords was shot in the head from near point-blank range. In stepping down from Congress in January 2012, she said, “I will return, and we will work together for Arizona and this great country.”

After her recovery, Rep. Giffords and Capt. Kelly founded Giffords: Courage to Fight Gun Violence to encourage elected officials to stand up for laws that make communities safer from gun violence. Together, the two have worked tirelessly to ensure leaders across the country cannot forget that Americans are demanding solutions to save lives from gun violence.

Their commitment to service has helped countless individuals create change and become inspired to lead a civically engaged life. We spoke with them to understand what fuels their passion for giving back.

You have both dedicated your lives in service to your country. Is this something you felt inspired to do at a young age?

Rep. Giffords: I’ve always considered Tucson home, the way people cared about one another and fostered a community stuck with me even when I left. That’s why not long after taking a job in New York City for PricewaterhouseCoopers, I felt the urge to give back in the way I saw growing up. So I moved back and took over the family business as president and CEO of El Campo Tire Warehouses. It was a wonderful experience working at a place that created opportunities for people in Tucson. But as much as I enjoyed increasing sales and creating Tucson jobs, I felt I could more for those around me. It’s why I threw my hat in the ring for Arizona House of Representatives. What better way to give back than work every day listening to people you represent, figuring out how to make their lives and community better?

Capt. Kelly: Growing up in New Jersey, you could say that public service was part of the family business. My mother was the first female police officer in West Orange, New Jersey. Not only was she the first, she also worked the night shift. Joining her on the force was my father, who was also a Naval paratrooper. Our parents were always for there for us, even when we caused a little trouble, and the example they set was pretty powerful for both my brother and me. My mother was always a positive person and I think that’s a big part of public service. She tried to understand what was going with others and from there she could better figure out how to help them. I don’t think my brother and I would have served our community in high school on the rescue squad without her example. That carried through my careers in the Navy and NASA. I can trace back my desire to fight and protect my country, and then explore space for America, to the example they set.

Former Rep. Giffords sits on the board of the National Institute for Civil Discourse, and you’ve both demonstrated a dedication to civil service. What does it mean to you lead a civic life, and how do you think average Americans can help create a civic culture?

When Gabby was serving in government, she made a point to hear everyone out. Whether you are in space or flying a plane, you also need to listen to the people who are on the team to bring you safely back. It’s one thing we’ve tried to do as we travel the country trying to make our laws stronger to stop our gun violence epidemic from hurting more: listening. Listening to people who want stronger laws, listening to people who are dealing with pain, listening to people who are scared of how changes could impact them. You can’t lead a civic life without understanding how others feel about the issues impacting us. When we do that, we can create stronger community bonds, and people feel more involved in decisions that impact us all. By understanding a viewpoint and being empathetic, you’re more likely to work with someone to tackle big issues.

The two of you co-founded Giffords: Courage to Fight Gun Violence. What has it been like working together on a cause so personal to you?

After the horror of the Sandy Hook shooting, seeing the grief on the face of parents and remembering our own experience with gun violence, we decided it was time to raise our voices and join the public debate on this issue. We knew it was going to be tough. We understood that there is an organized opposition, with deep pockets, to the policies we support. But part of public service is fighting for what’s right, even when the going gets hard. We stay focused and motivated by the organization’s supporters – over one million strong – who continue to raise their own voices through phone calls, letters, and social media posts.

What has been the most rewarding part of your service?

Traveling around the country and meeting so many people from all sorts of backgrounds that are willing to talk about this issue. That has translated into progress. We’ve passed more than 200 laws since the Sandy Hook Elementary School shooting – in red states and blues states, and every region of the country. Seeing others joining us take actions, both big and small, watching legislators pass laws we know will truly save lives, and fighting for something we know can make a difference has been an amazing experience.

We rely on the support of others. When Gabby was serving in office, she couldn’t have been in so many places without a talented staff by her side. When my parents served in law enforcement they relied on their partners to keep them safe. It doesn’t matter if you are working on a problem like pollution, petitioning your local legislator, or maybe making a run of your own – you need the help and support of others. Too often in these times we focus on how divided everyone in our country is. When politicians try to tear us apart by making us fearful and forgetting the importance of relying on one another, we all lose. By giving back, whether it’s to your family, friends, or community, you perpetuate a positive energy that not only makes you feel good, but improves the lives of those you’re impacting.

What future service, partnerships or programs are you most excited about?

We are tremendously excited about the future of our country. That’s because of the energy and passion we’ve seen from the young people of this country. They were sick of being afraid of going to school because of the potential for gunfire so they decided to do something about it. The March for Our Lives happened in cities and towns across the country – and they are not stopping. Many of these kids are getting engaged in politics for the first time and our spending time pushing lawmakers, encouraging others to vote, and getting involved in issues. More importantly, they are working together across all communities – rich and poor – to better make a difference. The first stop is showing up to vote in November and from there, we expect to hear a lot more.

What advice would you give to others looking for ways to make a difference?

Be optimistic. It’s important to always look forward, not backward. Fighting to address gun violence in our country is a marathon, not a sprint. But we are building a coalition that will make a difference. Others can do the same thing, no matter what they care about. At first, you’re going to work extremely hard to make just a few small improvements, but through determination, small victories begin to build up and you’re closer to achieving your goals than you had ever been before.