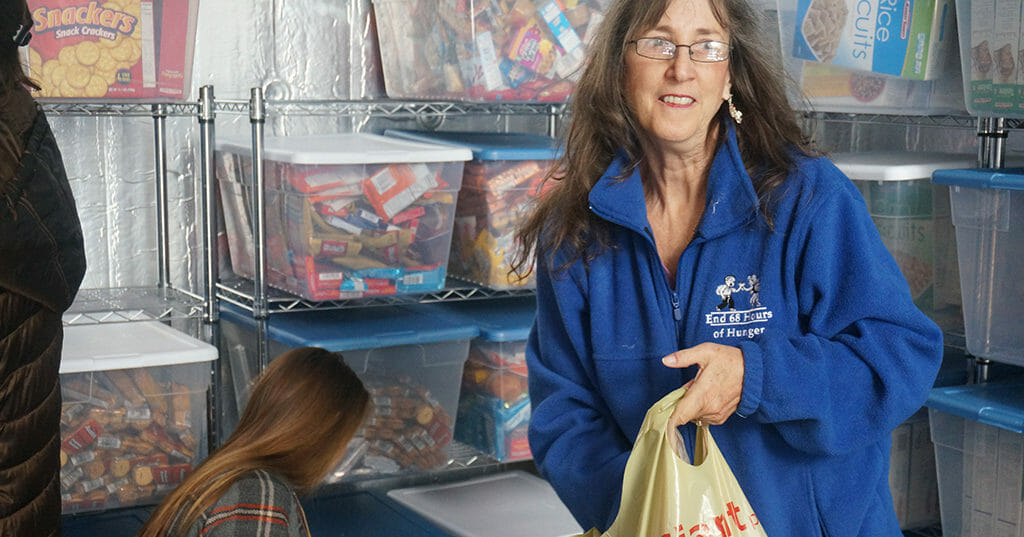 When confronted with big societal problems, like hunger, it is easy to feel overwhelmed. Aside from sending a donation to a local nonprofit, or volunteering at a local soup kitchen – we often feel that, as just one person, we can’t possibly do enough to make a difference. But when Claire Bloom, a retired Navy lieutenant commander, was confronted with the issue of childhood hunger in her own community of Rochester, New Hampshire, she knew she had to take action.

At a book club meeting in 2010, a teacher friend mentioned to Claire that many children in her district had little or nothing to eat for the 68 hours between their free school lunch on Fridays and free school breakfast on Mondays. Claire was shocked that any child in a tight-knit New Hampshire community could be hungry all weekend, and she had many questions. After a sleepless night, she called school officials, who confirmed that there were 73 district families in this situation.

“All I could think was I can’t know that these hungry children are out there and do nothing about it,” said Claire, who immediately started figuring out how she could arrange to send food home with children to carry them through the weekend.

Over the course of the next year, Claire put everything in place. She acquired permissions, food donations and storage locations, and set up a nonprofit organization and a network of volunteers. On a Friday afternoon in October 2011, 19 students in Dover went home with a backpack full of donated food, and End 68 Hours of Hunger was born. 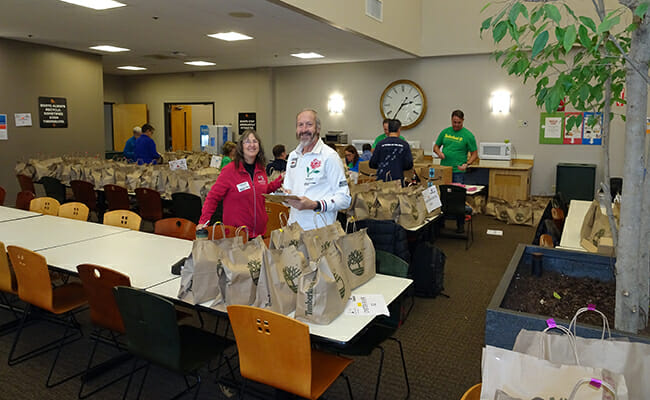 The system is simple. Volunteers pack backpacks with donated and purchased food, and deliver them to schools where staff members distribute them to children. At higher grades, where receiving donated food may carry a stigma, participating students can simply stop by a school nurse’s office to pick up food little by little through the week. Each weekly bag contains two breakfasts, two lunches and three dinners for a child, plus some food to share. Students return the empty backpacks to school on Mondays, volunteers pick them up, and the cycle begins again.

Claire and her volunteers never interact directly with the children, but she said she feels elated and invigorated over the positive feedback from schools – and “just astounded” by what’s transpired over the past five years. “It never occurred to me when I first started that we’d see such explosive growth.”

Her organization now sends more than 3,200 children home with food each weekend through 46 programs across seven states. More programs are being organized around the country, sparked in part by a short NBC Nightly News report in March 2014 about Claire’s efforts.

The wife, mother of four and proud grandmother, who was raised by two Army parents and earned master’s degrees in educational leadership and strategic intelligence, said she is humbled because she has simply laid the groundwork for a huge corps of volunteers. She describes herself as a “one-step-in-front-of-the-other” person who is not a visionary, but is well organized and detail-oriented.

Jeni Mosca, superintendent for SAU 56, which includes about 2,000 students from Somersworth and Rollinsford, New Hampshire, said End 68 Hours of Hunger has had a phenomenal impact on her district, allowing “so many grateful kids to come to school on Monday mornings energetic instead of lethargic and hungry.”

“Claire’s just the most giving woman. She’s been able to change lives,” said Jeni, who serves on the End 68 Hours of Hunger board. “She’s absolutely shown the world that one person can do great things.”

Board member Rob Eberle, CEO of global software company Bottomline Technologies, organized a donation of $68,000 from his company’s executive team to create a fund ensuring the longevity of End 68 Hours of Hunger. Claire also credits Rob with helping her to see the potential bigger picture for her initiative.

“It’s so straightforward and pure in its impact,” said Rob. “What impresses me most is that 100 percent goes to food for the kids, and everything is done by volunteers. Claire is addressing the problem of hunger in a very direct way that inspires others. It’ll be interesting to see how far this can grow.”

At the board’s urging, Claire created a detailed operations manual that lays out how to replicate the program elsewhere, as well as training videos that are available online.

“I don’t care if people follow this exactly. If someone can do what we’re doing a different way, I’m totally cool with that,” said Claire. “All I care about is that kids get fed.”