To commemorate the 10th anniversary of Hurricane Katrina, we are honoring volunteers who served along the Gulf Coast after the storm. Meet Sherry-Lea Bloodworth Botop, today's Daily Point of Light Award winner, and nominate an outstanding volunteer or organization you know as a Point of Light. 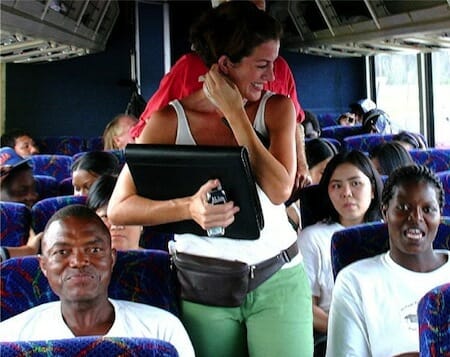 Sherry-Lea Bloodworth Botop, center, walks through one of the Gulf Coast evacuee buses she helped coordinate.

Sherry-Lea Bloodworth Botop’s drive to help others after Hurricane Katrina stemmed from her experience on 9/11. She was living in New York, a young, newly divorced, single mom with two small children.

“I remember walking downtown with the kids in their stroller to see what I could do” after the towers fell, she says. “There was nothing. I felt so helpless.”

Botop – a New Orleans native – moved south to rebuild her life, settling in Fairhope, Alabama, where she had family. She was there when Hurricane Katrina hit on Aug. 29, 2005. As water rose outside the church where she had taken shelter – the highest point between Florida and New Mexico – Botop went into action.

She persuaded the owner of a bus company, a fellow evacuee, to make every bus available for the rescue effort. Marshaling anyone with medical training, the convoy set out for New Orleans. 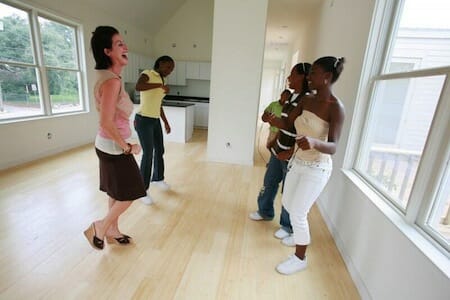 They never made it.

“We got just over the state line into Mississippi and saw that it was decimated,” Botop recalls. “There were people wandering, dazed and severely injured.”

Traveling back and forth from Biloxi, Mississippi, to shelters in Georgia and Alabama, the five busses continued the rescue mission. Coordinating with teams of volunteers, Botop helped rescue some 900 people, only stopping when the roads became impassable.

She mucked out shelters in Bay St. Louis, Mississippi, which had lost more than 80 percent of its housing stock, then headed to East Biloxi, one of the most underserved communities in Mississippi.

“Days and days after the storm there were still corpses on the street,” she recalls. “I was so angry. These people didn’t have food and water. I remember thinking, ‘Is this my country?’ More affluent communities were getting support, but this low-income community of African-American and Vietnamese people, it felt like somebody just forgot them.”

Botop, who had a background in the arts and nonprofit work, kept going to the next level looking for solutions. Whether asking the commanding officer of a military base set up in a Mississippi cow patch for packaged meals to feed the forgotten, or petitioning governors for funds and aid, she pressed on.

Her volunteer work took a personal toll. Separated from her children, who were staying with her parents, she wasn’t working, creating a financial strain. But she remained committed.

After the evacuations were completed, Botop shifted her focus to restoring the Gulf Coast and its communities. Her thought, always, was to create lasting change. The next phase – connecting survivors to resources so that they could rebuild their lives and homes – took the coordination of a village of experts and organizations.

“I was led to do what I did,” she recalls, adding that she drew from her Catholic faith for strength. “Somehow, with a little, pink flip phone, I was able to coordinate with governors in every state. I remember praying – If I’m doing the wrong thing, let me know. But we kept getting funding and doors kept opening.”

After five months of recovery work, Botop was hired by Architecture for Humanity as director of strategic development, working with communities and local architects in post-disaster rebuilding. In that role, she raised more than $40 million to help rebuild Gulf Coast communities. Now executive director of the Washington, D.C.-based Architects Foundation, Botop is a 2014 White House Innovation Fellow and a member of the Clinton Global Initiative.

“There is still plenty of work to be done,” she says of the Gulf Coast. “Especially in rural areas of Mississippi and in the underserved communities in New Orleans. If people want to help, they need to go to the source, to the neighborhood organizations and ask them what they need.”