As Texas, Florida and Puerto Rico face the aftermath of Hurricanes Harvey, Irma and Maria, Points of Light is honoring everyday citizens who stepped up to serve their communities during the immediate response and to embark on the long road to recovery. Meet Daily Point of Light Award honoree Leah Halbina, and nominate an outstanding volunteer you know as a point of light. 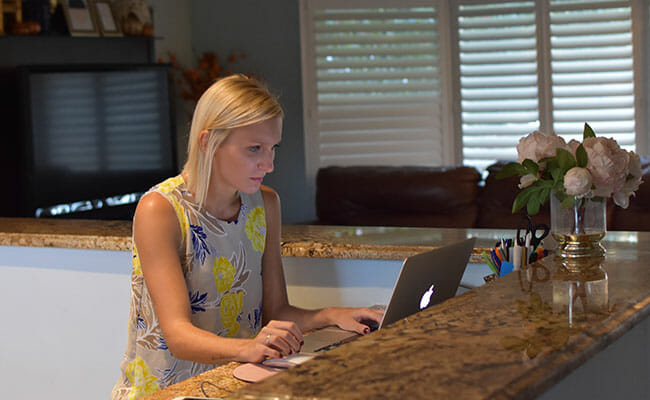 After Hurricane Harvey hit Texas, Leah Halbina reached out to friends in the Houston area to see how she could help. She found out about Sketch City, an open, nonprofit community of technology advocates and civic hackers that used technology to organize rescue efforts, help victims locate their nearest shelter and satisfy other pressing needs.

She jumped in to help Sketch City’s initiative harveyneeds.org by calling shelters and asking about their capacity. Shortly after, Leah had to use the technology in her home state of Florida as Hurricane Irma approached and made landfall. Leah and other volunteers created irmaresponse.org, a website providing victims with information on shelter locations and capacity, and providing donors with information on the needs of each shelter. Chatbots (via text and Facebook messenger) were used to help evacuees locate shelters, and were equipped to speak both English and Spanish, while the website was offered in English, Spanish and Creole to accommodate as many residents as possible.

Not only did Leah help many victims in the wake of both Harvey and Irma, she’s now part of a grassroots technology disaster response network that includes people from different tech communities in cities across the United States who were involved with rescue, relief and recovery efforts for Sandy, Harvey, Irma and Maria. The group is focused on making sure the critical tools built in response to these storms continue to be improved and leveraged.

We spoke with Leah to learn more about her efforts to help people affected by the storm.

What inspired you to volunteer in response to Hurricane Harvey and Irma? 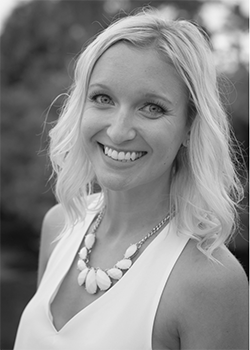 What initially inspired me was Sketch City’s “Harvey Needs” initiative and the entire team working on those tools for victims of Hurricane Harvey. It was amazingly overwhelming to see people jump in with one simple question: “How can I help?” It was so obvious there was a single, common goal of helping people who need it.

After Harvey hit Houston, I reached out to a few friends who live in Houston and asked the best organizations to donate to. At that point, I didn’t know how else to help and at least wanted to make sure it would go directly to people who needed it. One friend who shared JJ Watt’s Houston Flood Relief Fund and the Texas Diaper Bank also shared a post from Swamplot about what Sketch City was working on. I jumped into the conversation and found myself helping to set up and manage the HarveyNeeds.org social media presence.

Before Irma was a “thing,” there was already some talk about how we could expand Sketch City’s work to other cities for faster rollout when disaster strikes. Being that I live in South Florida, I thought it was a no-brainer to leverage the work from Harvey Needs.

Sketch City helped me reach out to local Code for America Brigades, and that’s how Irma Response was formed. From there, people started pouring in to help.

What inspired me to keep it going was witnessing the time, effort and passion put into Harvey Needs by everyone involved. I felt some sort of responsibility for making sure it would go on to help others.

For Irma Response, I took on a lot of the same responsibilities as Harvey Needs: Setting up our Facebook page, Twitter handle, website, and helping route new volunteers to help them find their place and a project they wanted to contribute to. With a lot of help from others in the group, I also managed our social media to spread the word about the available tools and resources.

It’s everything as a whole that has made it such a humbling experience.

Overall, the opportunity to witness a group of people from all over working toward a common goal was amazing. It’s hard to explain unless you’re in it but watching people jump into the Slack channel and get started wherever they thought they could help was awesome.

The most rewarding part is the opportunity to be part of something bigger than yourself. It really puts everything into perspective. We probably won’t ever meet the people this technology helped and none of us expect anything in return. Being part of something that helps people during a time of unimaginable stress, destruction and devastation, and having the support to keep it going makes it all worth it.

The sites irmaresponse.org and harveyheeds.org were the result of a collective effort by volunteers. Are there other people you would like to recognize for their efforts?

At a time when it feels like people are constantly at each other’s throats for one reason or another, it was nice to be reminded that there’s still a lot of good out there. And a lot of people who want to do good. I wish it was under different circumstances, but it was a nice reminder.

I especially learned a lot about how the tech community plays an important role in these situations. To help New York and New Jersey recover from Hurricane Sandy, New York Tech Responds and Occupy Sandy developed apps and tools. Sketch City did the same thing for Hurricane Harvey. We expanded it to Florida as Irma Response. And now we’re seeing similar efforts in Puerto Rico after Maria. Each initiative leveraging and learning from the previous one with the unique ability to move and work at the pace required. Every disaster represents unique sets of problems, in different combinations. We can’t in perfect precision determine the specific challenges, but having this infrastructure that’s now been proved in three different disasters is certainly a step in the right direction.

Someone who also worked on Harvey Needs, and then Irma Response, shared this quote with me and I think it’s perfect:

“Never doubt that a small group of thoughtful, committed citizens can change the world; indeed, it’s the only thing that ever has.” – Margaret Mead

I also think it’s important to put yourself in someone else’s shoes. That’s what I did for Harvey.

Groups involved in Harvey Needs and Irma Response have formed a grassroots technology disaster relief network whose mission will be to strengthen this infrastructure so other cities can benefit from it.

There are also plans for collaboration with local officials to understand how we can better support them moving forward.

Never underestimate the difference you can make. When it’s something you’re truly passionate about and you’re working with such a collaborative, supporting team it can make all the difference in the world.

I was so inspired by Sketch City’s work and I just hope at least one person felt the same way working with Irma Response. In each of these disasters, the civic tech community built critical tools. We’ve seen firsthand that this works and makes a huge difference.

How can people get involved in supporting efforts like irmaresponse.org in the future?

Get involved with your local tech brigade/community:

Leah Halbina will be recognized at the “Deep From the Heart: The One America Appeal” benefit concert on Oct. 21, 2017, at Reed Arena on the Texas A&M University campus. She will receive her Daily Point of Light Award from Points of Light Chairman Neil Bush, and will be recognized on stage with the five living former presidents, Barack Obama, George W. Bush, Bill Clinton, George H.W. Bush and Jimmy Carter. The presidents launched the One America Appeal on Sept. 7, 2017, to raise funds for Hurricane Harvey relief, and subsequently expanded the initiative to include the regions affected by Hurricanes Irma and Maria. Funds raised will be distributed to Houston Harvey Relief Fund, focusing on the greater Houston region; Rebuild Texas Fund, which distributes funds throughout the state; Florida Disaster Fund; Juntos y Unidos Por Puerto Rico, launched by the territory’s First Lady Beatriz Rossello and a private sector coalition; and The Fund for the Virgin Islands.