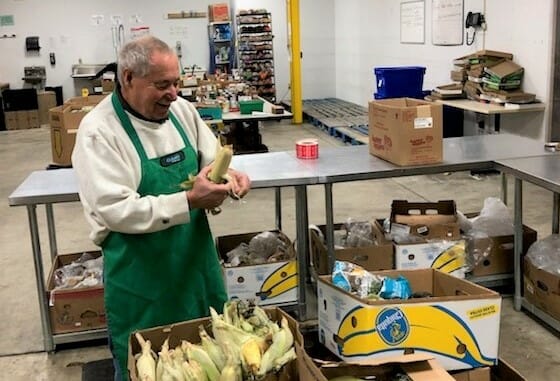 In 1989, former President George H.W Bush spoke of “a thousand points of light, of all the community organizations that are spread like stars throughout the nation, doing good” and emphasized his commitment to make community service a centerpiece of his presidency. Well, one person watching his inaugural speech and taking it to heart was Bob Marshak of St. Louis, Missouri. Bob took the president’s words as a call to arms and has dedicated his retirement years to serving his community.

For over 10 years, Bob volunteered with the American Red Cross, but wanting something more local and engaged with the community, he discovered the Harvey Kornblum Jewish Food Pantry, which provides food, personal care items and community resource referrals to struggling individuals and families. With one in eight American households finding it difficult to provide enough food to all family members in 2017, according to FeedingAmerica.org, Bob realizes that food insecurity is a major problem in America, and is doing his part in St. Louis to be a part of the solution. He is today’s Daily Point of Light Award honoree, and we spoke with him to learn more about his passion for community service.

My wife Dianne actually started us on this journey of working for different charities and doing different works of good. She saw an article in her church bulletin many years ago and said we should start volunteering. So she was actually the spark and we have continued that for all these years.

I volunteer with the Harvey Kornblum Jewish Food Pantry (HKJFP) and it’s been over three years now. I recognized how difficult it is in St. Louis. We have such a disparity in food security and I wanted to do something. The work that I do there is basically grunt work, for lack of a better term. But essentially, the food pantries, and I think this is correct for all across America, rely on volunteers so there’s a lot of things that have to be done. For example we separate good fruit from bad fruit, good vegetables from bad vegetables. We create an environment where people have dignity and can shop and obtain hat they need for their families.

The HKJFP feeds about an estimated 6,000 people a month. That’s a sobering fact when you consider that we’re living in, at least in this part of St. Louis county, somewhat of an affluent community This food pantry is a combination of many things including USDA surplus foods and an awful lot food fresh produce and fresh foods. They’re collected from supermarkets in the St. Louis area. They’re also collected from, for example, Panera Bread. We get all the extra bread that’s left in the evenings. We get an awful lot of fruits and vegetables that are very close to being unusable and yet in a matter of a day or two, all the good can be separated from the bad. The beautiful thing about the food pantry is that it’s like a grocery store. Individuals can come in and they have a shopping cart and they can simply get what they need to feed their family. 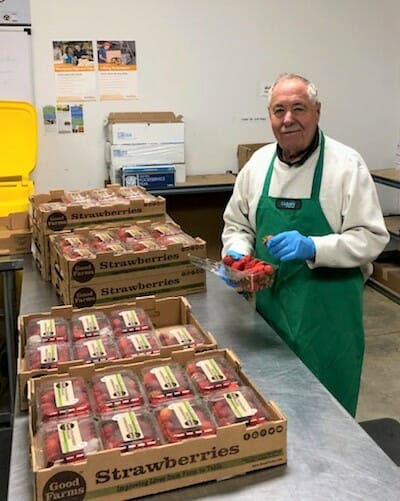 Walking out of the food pantry in the afternoon knowing that we have provided fresh, good, quality food to people that need it is heartwarming and it moves you forward to the next week and the next. The things that we do are in and of themselves, you can look at them, relatively unimportant, but they really make a difference. So when you finish your volunteer shift at the food pantry, and you know you’ve helped people that need help and need good food, it’s very heartwarming and rewarding.

We have problems in St. Louis that we have yet to solve. When you look at many cities across the country, we have racial imbalances. We have racial divisions in St. Louis that we have not yet solved. My wife and I and a group of other individuals are working on some projects in the Ville neighborhood in North City. We’re working on a tiny house project for the homeless and for those at risk. These are two tiny homes and these are the first in St. Louis. The two homes were built by students in the St. Louis County school district, the Rockwood school district, and we have moved those to the city. They are on permanent foundations and we are finishing the interiors now. We plan to have them finished, inspected and approved for occupancy and occupied by this winter. The third house, which is in the same complex, will be built on site and we fully intend to have that finished next year. At the same time, there’s a project called the North City Food Hub that is just getting started. One of our goals is to set up a small food pantry in that area. The term is overused, but it truly is a food desert. Most of the major supermarkets exclude that city. The food pantry can be done because there are some neighborhood gardens that produce a lot of vegetables in the summer time. So the question is how do we get those out and not waste it? And then if you add onto that, how can you teach families how to process that food? For example, you can can it or freeze it and make it available throughout the year. We are members of a group called Social Justice 4 All and the other one is North Grand Neighborhood Services. They are going to own these tiny houses.

We’re all human. We have a shared responsibility. We’re all in this together. This is the way this country was founded. You look back and you look at how many people helped others. I think it helped in more rural communities and in the earlier years of the urban community. But we’ve lost some of it. I think it’s critical to regain it. I keep going back to President Bush’s thousand points of light. I think that’s what he intended. That’s what he thought we should do so this is just following up on that. And again, you look at these recent natural disasters and it’s not just FEMA and other government organizations, but look at the NGOs. We had some floods and tornados in Missouri and it was the NGOs and volunteers that came in and opened up soup kitchens, opened up feeding stations and provided blankets and clothes. This was all volunteers. It was no government money. I think that’s the American spirit. I think each of those in some small way do their part. If we do, we can solve these problems.

To recognize that each of us can make a small difference. When you add that up and look at the totality, it makes a big difference. That’s the takeaway. All of us can do something. All of us can contribute in some way to the betterment of the country. We take that as individuals and all of a sudden, it’s a mighty force. My goal is to inspire others to do the same because one individual can make a difference.

Do you want to make a difference in your community like Bob? Visit All For Good for local volunteer opportunities.