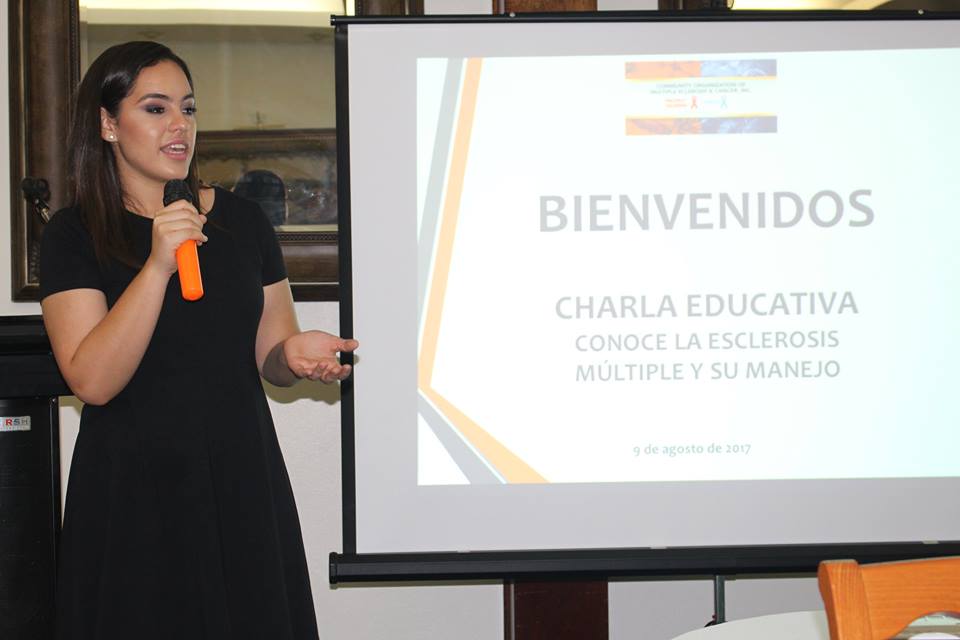 When it came time for then-16-year-old Vilmarie Ocasio to decide what she was going to do for her Gold Award project, the highest achievement in Girl Scouts, she knew she wanted to focus on raising awareness for multiple sclerosis (MS) and cancer. The Puerto Rico native’s mother had recently been diagnosed with MS after years of doctors being unable to determine what was wrong, and Ocasio didn’t want to see others go through the confusion and uncertainty that came after her mother’s MS diagnosis. Through her project, Ocasio raised awareness for MS and cancer, and also advocated for the approval of the Senate Bill 1180, which would create a mandatory registry for people diagnosed with MS in Puerto Rico. With her help, the bill passed to become Law 85 in 2016, and is already helping with genetic studies research at the University of Miami.

After finishing her Girl Scouts project, Ocasio decided to keep working to spread awareness of MS and cancer by founding Community Organization of Multiple Sclerosis & Cancer, Inc. (COMSC), in 2017. She uses donations to COMSC to send portable mini air conditioners to patients in Puerto Rico who are struggling with the electrical power outages after Hurricane Maria. She has also implemented multiple awareness campaigns and coordinated educational conferences. Now attending Coastal Carolina University in South Carolina, Ocasio continues to educate on these health issues through social media campaigns and through educating local high school students and her fellow students at CCU.

Ocasio is committed to making a difference in the lives of those affected by MS and cancer, and she is today’s Daily Point of Light Award honoree. Points of Light spoke with her about her commitment to service.

Describe your volunteer role with COMSC.

After the community work that I did with Girl Scouts, I decided to keep on working with [MS and cancer awareness]. I sent mini air conditioners to those patients back in Puerto Rico after Hurricane Maria came along, thanks to donations people gave me from Facebook. Now I’m still working on that to keep sending those mini air conditioners. They’re portable. This will benefit many people that have the condition because my mom actually used this resource after the hurricane.

Why did you choose to focus on Multiple Sclerosis and cancer?

I got interested in this cause because my mom was diagnosed with multiple sclerosis back in 2014. It was a really hard process for my family and for myself because we thought that she was going to die and we didn’t have the resources we needed to know about the condition. We didn’t know where to find help, we didn’t know anything. That’s why I decided to orientate people about the condition and help them anyway possible that we can.

I got the chance to work on my Gold Award project from Girl Scouts and that’s when I decided to do my project [based on MS]. I did a lot of campaigns to benefit the people that have multiple sclerosis and the doctors also. We had many experiences where doctors didn’t know how to medicate my mom. She took around six years to be diagnosed with MS. I did a large campaign toward the public in general, because we also had experiences where people didn’t believe that my mom had the condition and just judged her because she was using a wheelchair in the supermarket. People just didn’t understand how if she seems capable walking around and she seems perfectly ok, why is she using the wheelchair or anything? At my school, I also did a campaign toward teenagers about multiple sclerosis and the human papillomavirus (HPV), because I saw that [the number of people who have it] was increasing. Because it’s a sexually transmitted disease, many teenagers weren’t aware of the effects of having sex [without protection.] That really worried me. It still worries me. Many people are working on that to get vaccinated and get educated about the condition. With MS, I also orientated them because as a collective in high school, we’re the future doctors, we’re the future of the society. If we know about these conditions beforehand, we can help people in the future. 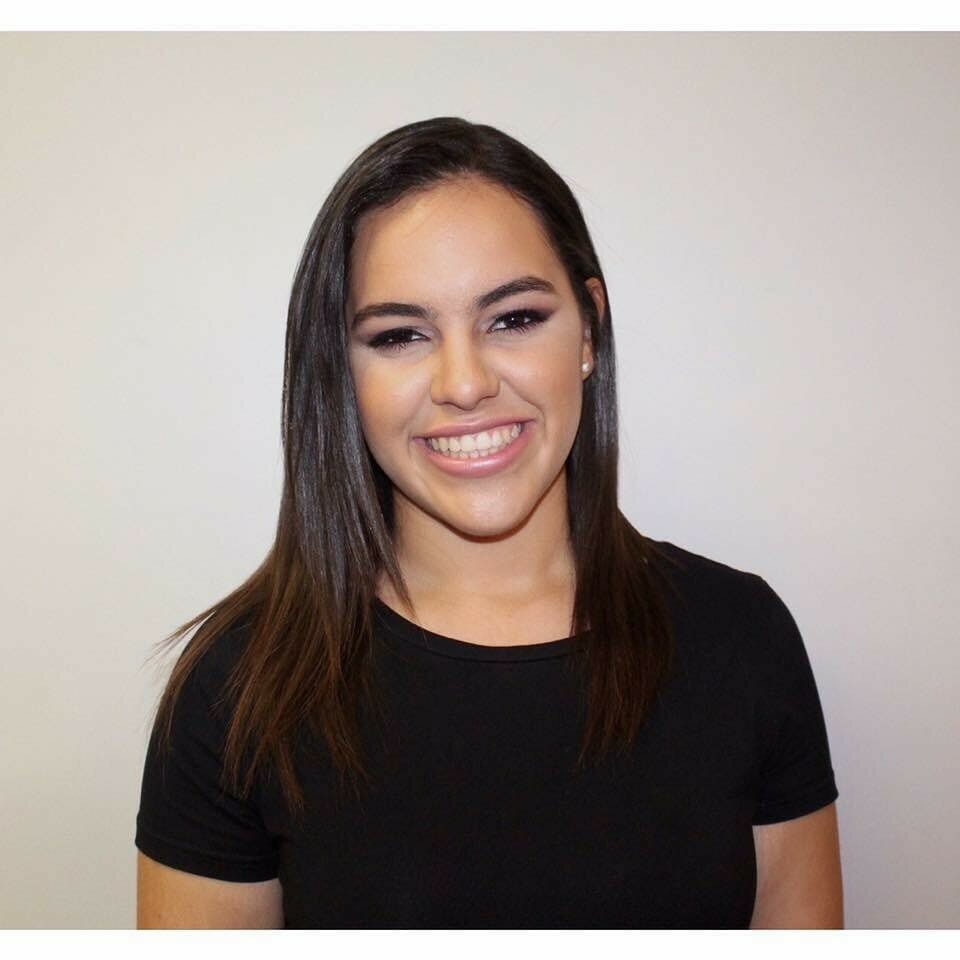 Describe getting Law 85 passed. Why is it important?

I knew it was in the Capitol, and I saw that it was there for two years and I didn’t see any action. So I took this bill and actually advocated until it’s approval. I looked for information on why it was important, why was it necessary for the island to have this registry. If we have a registry for MS patients, or with any kind of disease or condition, we actually can now get funds. That law, this required registry, is going to be the first resource where people will look at it and be like [for example], ‘Ok, they’re telling the truth, there’s 4,000 patients that have MS because of this registry. We can give you about $500,000 because you’re telling me you need that for this amount of patients.’ It’s going to be more credible because you have a registry. For genetic studies … you’re going to see that amount of people and it’s accurate, because you have a registry and it’s required. It’s not voluntary or someone taking it by their own hands. It’s a law where you can actually see [the information] on paper.

With my non profit right now, I’m working on another law in Puerto Rico. One of my projects that I did before that, it was to orientate the youth in high schools about MS and human papillomavirus.  So if we could bring it to a law, all of the high schools in Puerto Rico are going to be orientated about that condition. It’s going to be over 100,000 students being impacted by that information. And then also to keep on sending the mini portable air conditioners to those patients back in Puerto Rico because hurricane season is once a year but it’s always there, especially since we’re on an island. So to keep on sending those mini portable air conditioners over there and just to spread awareness about MS. Also here in South Carolina, I’m working with the MS society to also impact the high schools over here in the county where I currently live. It’s going to be in March, the MS awareness week, that’s when we’re planning to involve the high schools over here in my county and my university. Many people around the United States are also getting involved through Facebook, through social media.

I know that I’ve won many awards and all that and that’s really gratifying. But it’s mostly when people actually are really thankful. I’ve seen during my journey that many people are really in need of help, they really need that support. When people say thank you and are really grateful that I helped them and are really genuine on everything that I do, that’s my most gratifying achievement and I’ve seen it in many people recently. I helped give a nurse to one MS patient in Puerto Rico. She is on her bed and she is blind so she only depends on her children, but her children are all grown up and they have a busy life, so she doesn’t have that support she needs. With the mayor of that city [in Puerto Rico], we help her to actually get a nurse two times a week. I called her recently and she’s really grateful. She’s like, ‘Really, thank you, my children are really thankful too, they really needed this help, I really needed this help.’ 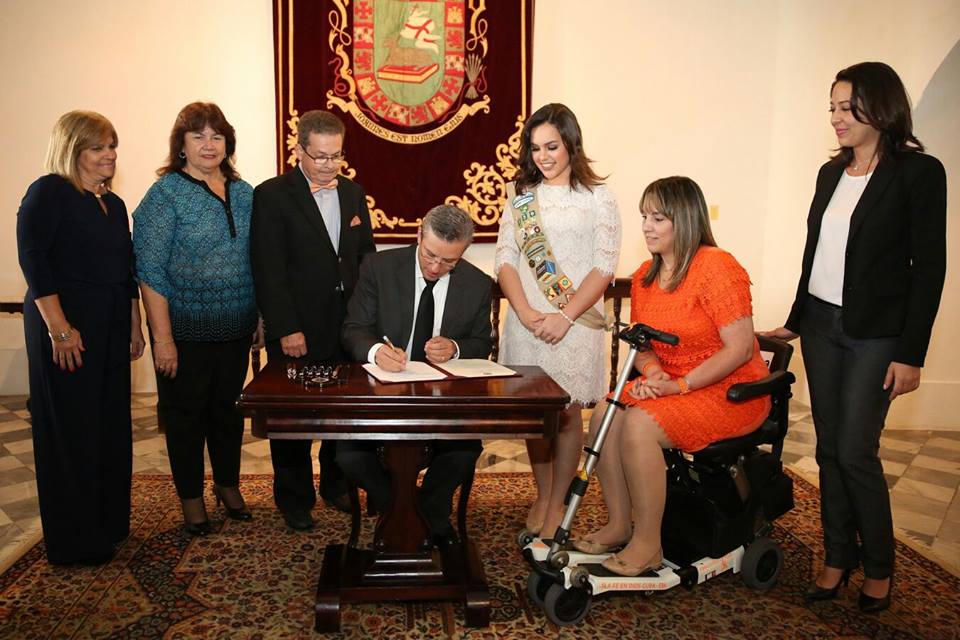 I’ve learned how to express myself in front of an audience and to lose the fear. Even though I get super stressed out before I talk in any interview, that’s one of the things that I’ve done where I just got out of my shell and tried to talk in front of people. Also, I’ve learned to be really patient and to not give up easily. In the world, there’s not many people that are going to help you. I’ve learned that yeah, there’s going to be people like that but there’s also going to be many more that are going to help you. So [I learned to] not really focus on those negative thoughts, those negative situations and be more focused on the positive outcome and the positive people. And just to not give up on what you really want to do because it’s not going to be easy at first. It’s going to take some time skill and patience to actually build what you want to do.

It’s important for others to give back because you see so many people that actually are in need of help, and you have to be grateful for the things you have. If you have the skills and this ability to do those things, why not give back and actually help those people that actually need it? I’ve seen during my journey that many people are really seeking that support. So if you’re capable of doing something and you’re really able to do it and you have the energy and the excitement, why not do it? It’s really important to help people because at the end, it’s going to be really gratifying for yourself and you’re going to be proud. Seeing those people’s [that you helped] faces, you’re going to be like, ‘yeah, at least I did something in this world, I didn’t just stay in my house and not do anything. I helped create something for this society.’

That you’re capable of doing any work that you put your mind to at any age. There’s no age that can stop you or limit yourself to do something. I’ve seen many of my peers say, ‘Oh, I’m too young to do this, I just have to wait ten more years to actually be a professional so they can listen to me and they can actually help me do what I want.’ You don’t have to actually be a professional. I hadn’t even graduated high school when I was doing my projects. So you don’t have to have an education or anything if you are really willing and have the energy and excitement to do something. If you have the energy and want to do something, go for it. It’s going to be hard at first because nothing really is easy. If it was easy, everyone would do it. That’s what I tell my friends, they’re like, ‘Oh, I can’t do this because I don’t have the resources like you Vilmarie, I can’t.’ You can. You just have to find your way through it and actually accomplish it. There’s going to be people that are not going to help you. You just have to put them aside and then find the people who are going to help you and then show those people that didn’t help you that you did it.

Do you want to make a difference in your community like Vilmarie Ocasio? Visit All For Good for local volunteer opportunities.