Meet Daily Point of Light Award honoree Trisha Prabhu. Read her story and nominate an outstanding volunteer or organization as a Point of Light. 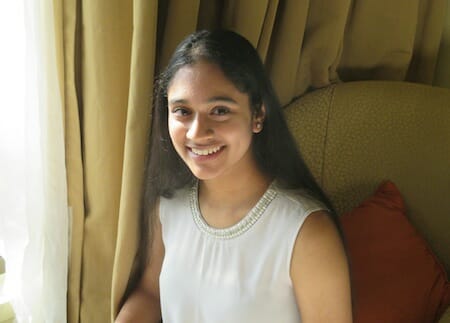 When Trisha Prabhu read about a 12-year-old Florida girl who killed herself after being taunted mercilessly online, the news shook her.

“I was stunned to think that someone who was younger than I could be pushed to a place where they’d think their life wasn’t worth living,” says Trisha, 15.

And although the Naperville, Illinois, teen had occasionally been teased online herself, she had no idea that in some cases the pattern could go on longer and cut deeper. As she learned more about cyber-bullying – which 20 percent of American high school students say they have experienced – she decided to do something.

“I was raised in a family where I was told that age shouldn’t be a limit,” she says. “You can always make a difference.”

Building on her experience in coding, Trisha developed ReThink, a software product that issues a prompt whenever a user types a potentially offensive text, tweet or Facebook message.

“Most kids have morals instilled in them growing up and have inherently good intentions,” she says, adding that as adolescent brains aren’t fully developed, young people often succumb to impulsiveness and take unnecessary risks.

Reaching out via social marketing platforms, Trisha recruited teens to test ReThink. In more than 93 percent of the cases, users reported reconsidering their initial inclinations and choosing not to send offending messages. With such a success rate – and bolstered by her appearances at the White House and a TEDxTeen conference – Trisha decided to make a push to introduce the product, at no cost, to schools nationwide for download on classroom computers.

Trisha says that when school starts in September, ReThink could potentially roll out to hundreds of thousands of kids.

She knows that’s just a start – kids have myriad opportunities to use other computers and smart phones to fire off taunts, plus the program doesn’t yet address sending sexual or otherwise iffy images.

All in good time, says Trisha. “Meanwhile, when no one is there peering over (young people’s) shoulders, ReThink acts just like a parent. In fact, I’m considering changing the wording to say, `Is this something your mother would be proud of?’”