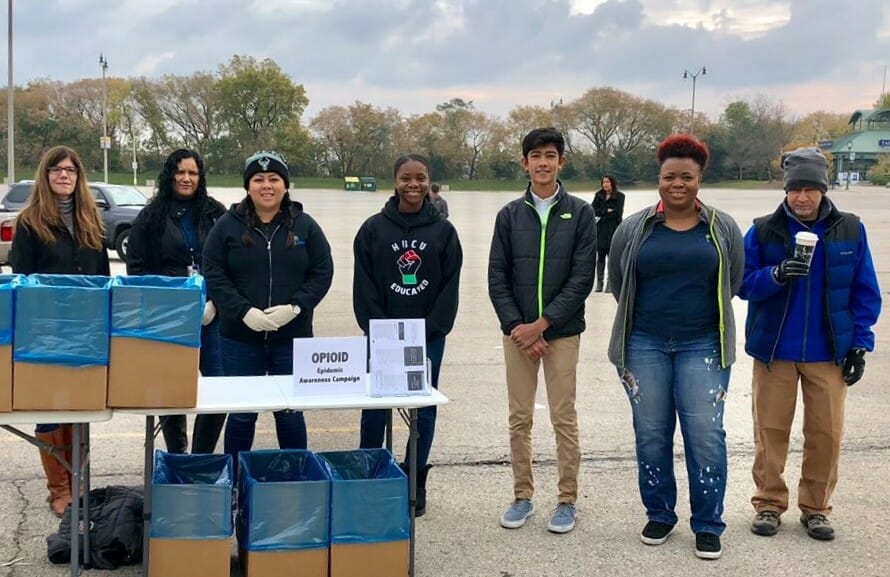 As a sixteen-year-old high school student looking to give back to his Milwaukee community, Neil Sai Dogra could have easily chosen to volunteer for one organization, and then spend the rest of his time focused on school, friends and having fun. But for Neil, having fun involves volunteering his time to not one, but at least six different organizations and counting.

He plays guitar for hospital patients, teaches kindergarteners about safety, and volunteers for both a health center and a learning center that predominantly cater to refugees. He is co-president of a charity organization that provides free lunch to disabled children being treated at a rehab center in India, as well as the founder of an opioid awareness campaign aimed to public school students. On top of this, he found time to shoot a short documentary on the refugees he works with that has been screened worldwide, and is now working on shooting another one. Neil’s motivation comes solely from the joy he gets from giving back to the community.

Due to the numerous ways he has benefited those around him, Neil is today’s Daily Point of Life Award honoree. Points of Light interviewed him to learn what exactly he does to help so many around him.

You are involved in a lot of different volunteer opportunities. Describe the ways you volunteer.

I do a wide plethora of volunteering within my community. I play guitar at a local hospital for the patients there waiting as a way of stress relief, as a way of welcoming them. I volunteer with the Thiensville Police Department, where basically I’m an instructor for a program called Safety Town. That’s a free program for kids in kindergarten to learn about things like fire safety, safety around strangers, how to call 911 in case of emergency, and just a way for acquainting the kids with emergency services and fighting against a stigma that police are bad or that the government can be an enemy of the people.

I’m involved with the Muslim Community Health Center. That’s a free clinic … that caters to predominately refugees in Milwaukee and it offers incredible services to them at a very low cost, sometimes even for free, ranging from blood tests, clinical work, all the way to to financial literacy programs. They have lawyers come in from Marquette University to teach refugees about basically what it’s like to live in the United States, and help them integrate within our city and community. Then I’m involved with the Crescent Learning Center that’s actually right next door to the Muslim Community Health Center, which is how I found out about that program. The Crescent Learning Center is also catered toward refugees, so that provides a day care service to children of refugees and allows them to seek occupations without having to worry about where their kids go. It provides meals every single day, it provides field trips to movies, ice skating, stuff like that. I go there and I volunteer, I play guitar for them, sometimes I teach them about things like math or science. And then I heard some of the stories of the parents and then the  staff [who are] as well as predominately refugees. They’re very compelling and that really moved me, so I decided to make a short documentary [“Crescent of Hope”] about the stories of refugees and the story of Crescent Learning Center and the services it provides. That film has been broadcasted from all over the world ranging from Times Square, New York to Istanbul. The purpose was really to raise awareness about the refugee population within Milwaukee and what kids like myself can do to make a difference.

Lastly, I founded the Opioid Epidemic Awareness Campaign. Milwaukee, and really the United States in general, are in the grasp of a raging epidemic of opioid misuse. I realized that I was completely unaware to this crisis within our city, until I heard a UWM radio talk. So that got me thinking that there are probably other students like myself who have no idea about this issue. So I decided to raise awareness in the Milwaukee public schools. I’m working with the head of the physical education department and I prepared a presentation that teaches kids what opioids are, how they interact with neurons within our body to cause addiction, how they are affecting our community. I touch on what students like myself can do to help which includes raising awareness, spreading things like drug disposal systems, because 80 percent of opioid addicts begin on prescription medications that they found lying around houses. By disposing of those pills, we can prevent an addiction from forming. Lastly, I want to encourage them to fight the stigma of addiction as something that is the sole responsibility of the addict and encourage addicts to reach out and get help from a medical professional to treat their addictions. As you can see, that’s a wide range of what I’m involved in. I really just like taking all the things I feel like I’m good at — so playing guitar, math, science — and finding ways to help the community by doing the things I love.

What gave you the idea to create the documentary “Crescent of Hope”?

So there was one [Crescent Learning Center] employee in particular … she is a Burmese refugee, she is a Rohingya refugee from Myanmar, and her kids actually attended the camp at Crescent Learning Center. We started talking about her story and she was very moving in her story. She talked about how difficult it was to move. Her family lived in refugee camps in Bangladesh, but they were not suitable for a long life. They were intended to be temporary relief and so when she was accepted into the United States as part of the refugee resettlement program, she jumped on the opportunity and came. But she found it wasn’t an easy integration process. She didn’t know English, it was difficult finding a job, it was difficult supporting her kids all alone. Crescent Learning Center helped her earn a degree in teaching and childcare, so now she works for Crescent Learning Center, her kids have meals and a program to go to every single day so she can focus on basically supporting her family. That really compelled me to raise awareness of this issue of refugees and their integration process and furthermore just to shine light on the philanthropic aspects of Crescent Learning Center.

Talk to me about Assist Bhopal.

I visited Bhopal, it’s a region in India. I visited that in I think 2013 and while I was there I learned about Bhopal’s gas tragedy. In 1984, there was a chemical plant in Bhopal … and one of it’s gas containers leaked and formed a cloud of methyl isocyanate within the city and thousands of people died that night. One of my good family friends was exposed to the gases, he had a lot of health issues because of it. Then people just forgot about it, they assumed the worst of it was over. But what they found out is that the children who suffered the attack who are now adults have kids with several birth defects. Cerebral palsy is extremely common in Bhopal at an alarming rate, along with several other congenital birth defects and deformations. Two survivors of the gas tragedy decided to form a clinic called Chingari. They provide affordable and often free healthcare to these children to care for them, to treat their defects. One of the problems they run into is they don’t have funding to provide food. So this fundraiser [Assist Bhopal] seeks to provide lunches every single day for the kids that attend. It’s extremely cheap to provide lunches, I believe it’s 65 U.S. dollars a day to feed a child for an entire year. Every year we hold a fundraiser with the goal of raising money to feed these children and to date we have raised 30,000 dollars which we donated to Physicians for Social Responsibility, which then transfers that to Chingari’s funds.

The fundraisers we hold every year are the main source of income. We have a local restaurant … provide food and then we have a lot of speakers come in that have visited the hospital along with that family friend [who was affected by Bhopal], he often speaks there. He has an incredibly moving story about how his driver helped to get his family out of the gas cloud, and left his own family to help. Then throughout the year we have monthly donors that donate funds, we have several family friends along with people from all over the world who have decided to help out. It’s mostly donations and then that one fundraiser is the largest source of revenue. 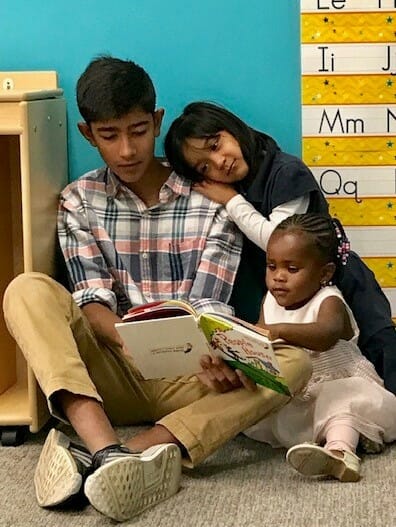 How are you able to balance all these different volunteer opportunities with school?

I feel like it’s not as hard as people think. If you really enjoy it you can make the time. Twenty-four hours in a day is really more than you need. These have really just become my extracurriculars along with my hobbies. People think, ‘how are you going to balance playing video games and whatever with doing all this stuff?’ And really, this has become what I choose to do when I have free time. I choose to work on a documentary or I choose to drive over to the hospital and play guitar for half an hour. If you want to do something, you can make a difference very easily.

I’ve learned that volunteering is not the strict definition that I often associated with it. I always though volunteering entailed doing hard labor jobs that nobody else really wanted to do. I always thought it was things like pulling weeds out of a garden or restocking shelves. But I’ve learned that volunteering is really just doing anything that helps your community and it’s in the process helping you. I’ve decided that my version of volunteering is taking everything that I’m good at, things that I love, and how I can apply that to the community and help a community. So I really just want to encourage kids out there to redefine their understandings of what volunteering is. If they like pulling weeds out a garden or restocking shelves, that’s great, they should do that. But if they like playing piano or playing tennis or whatever, they can use that to help the community. They can teach somebody how to play piano and that alone can change lives.

I made my first documentary for Crescent Learning Center and then having watched that documentary, the Muslim Community Health Center wanted me to make a promotional video for them to raise awareness and support their causes. So I’m currently working on at that and hopefully it will be filmed during the next Ramadan.

For me personally, it was really compelling because Milwaukee has provided so much for me. I’ve lived an incredibly privileged life and I realize that’s not the case for so many people. It’s important to better your community I believe, and really to just be grateful for all that I have, and I just wanted to give back.

Do you want to make a difference in your community like Neil? Visit All For Good for local volunteer opportunities.