During National Volunteer Week, we celebrate the impact of volunteer service in our communities, and recognize extraordinary individuals who are at the center of social change – like Daily Point of Light Award honorees Will and Matty Gladstone. Read their story and nominate an outstanding volunteer or family as a Daily Point of Light. 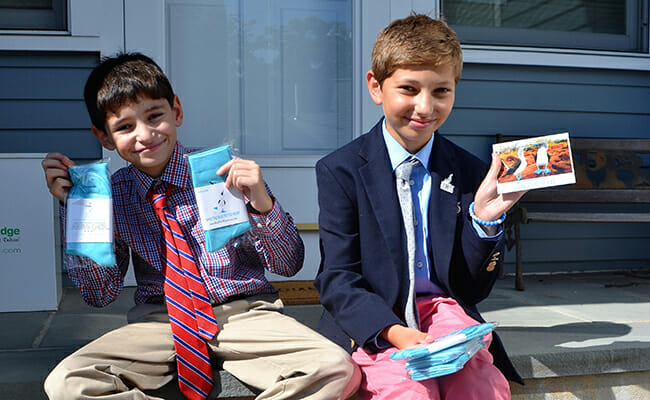 Two years ago, Will Gladstone studied the endangered blue-footed booby in his fifth-grade science class. He learned its population had declined by 50 percent in the past 60 years, and scientists didn’t know why.

Most kids would have closed their book and forgotten about the endangered bird, living far away in the Galápagos Islands. But not Will.

He was intrigued by this “really cool bird.”

Will wanted to do something to help, and began staring at his feet. He came up with the idea of selling blue socks, so everyone could have blue feet like the blue-footed booby. His dad helped find someone to make the socks, and they held a logo contest online.“It has bright blue feet and dances,” said Will, age 13. “It also isn’t afraid of people, so it’s really friendly. It made me sad to think it might disappear.”

Younger brother Matty, age 10, also wanted to be a part of the project, and came up with The Blue Feet Foundation name. Together, the boys were ready to raise money to help save the blue-footed boobies.

At first, no one took the two kids seriously, and it was three months before they sold any socks. However, they have now sold more than 3,000 pairs of socks, with orders coming in from all 50 states and across 30 countries.

Will and Matty have already raised more than $40,000 for their cause. And, in 2017, they helped the Galapagos Conservancy fund an expedition for Dr. David J. Anderson, a professor at Wake Forest University and a world-renowned expert in blue-footed boobies, to study the population decline.

The Blue Feet Foundation has also attracted a large following on social media, with more than 12,000 followers on Instagram alone. Their followers post photos wearing the foundation’s signature blue socks making appearances all over the world, including the Grand Canyon, the Great Wall of China and Stonehenge.

“More people know about the blue-footed booby because of us,” said Matty.

Their school, The Fessenden School in Newton, Massachusetts, has also been supportive of The Blue Feet Foundation, even hosting one day where all the students wore blue socks.

When the boys aren’t saving endangered birds, Will likes to play sports and video games. He also likes to watch hockey and says his favorite hockey player, Kevan Miller of the Boston Bruins, sent a photo wearing The Blue Feet Foundation socks. Matty also likes sports, reading and playing videos games, and he enjoys hiking with his three dogs as well.

Both boys understand the impact of giving back to the community. “We need to inspire people to want to help everyone else, so the world gets better.”

Matty says it makes him feel good to help the world be a nicer place. “If people don’t help other people and animals, the world would be a bad place and never get better.”

As for the future of The Blue Feet Foundation, Matty says, “I hope we go out of business, because that means we saved the blue-footed booby.”

The Difference They Make 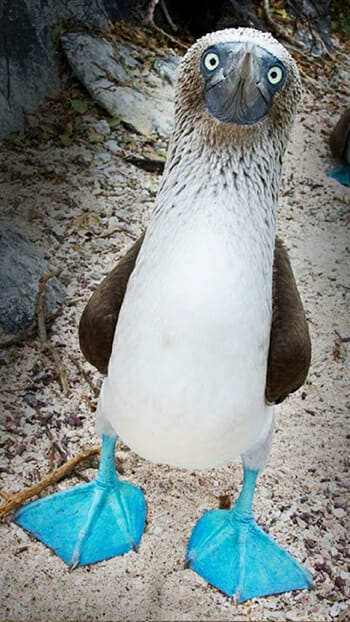 As of March 2018, The Blue Feet Foundation has made 11 donations to the Galapagos Conservancy, ranging from $500 up to $8,000, for a total of $33,000. The funds have gone towards the conservation of the blue-footed booby, including funding the 2017 population census led by Dr. Anderson.

“Will and I have been exchanging emails since March 2016, and I admit when he first contacted me I was sure I would never hear from him again,” said Lori Ulrich, director of membership and marketing at the Galapagos Conservancy. “A lot of kids contact us with ambitious book projects or fundraising ideas, but none have ever put in the effort or succeeded quite as well as Will and Matty.”

Lori has been consistently amazed by the boys’ success.

“We hope that, in time, we can report that the blue-footed boobies in Galápagos are making a comeback, and that Will and Matty Gladstone and The Blue Feet Foundation played a large role in their recovery,” she said.

Want to make a difference in your community? Find local opportunities to get involved at www.allforgood.org.