Meet Daily Point of Light Award honoree Ellie von Wellshiem. Read her story and nominate an outstanding volunteer, family or organization as a Point of Light. 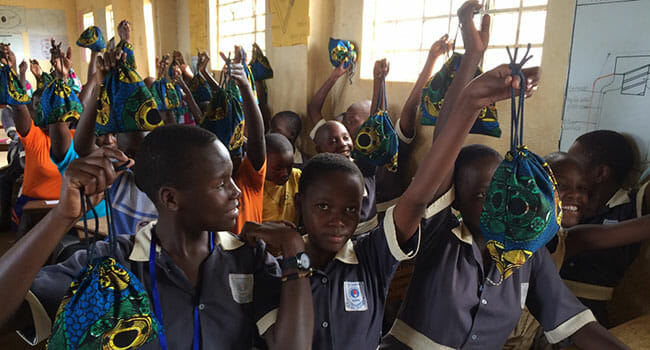 At least once a month, Ellie von Wellsheim presides over sewing bees where she guides the hands of volunteers as they sew pieces of brightly colored fabric into reusable menstrual pads. The pads are destined for girls in Uganda, Malawi, and a host of other developing countries that lack the money and access to purchase feminine hygiene products.

“To put it simply, we try to keep girls in school,” said Ellie, who is the founder of The MoonCatcher Project. “When it first came to my attention that there were girls dropping out of school because they had no way of dealing with menstruation, I was shocked.”

According to Femme International, “In East Africa, menstruation is one of the biggest reasons why adolescent girls miss school. Poor menstrual management is also the leading cause of reproductive tract infections in women globally.”

“Life is really hard if you can’t take care of this most basic thing that happens to women,” Ellie said. “And, we really want these girls to end up being in control – and be confident and be comfortable.” 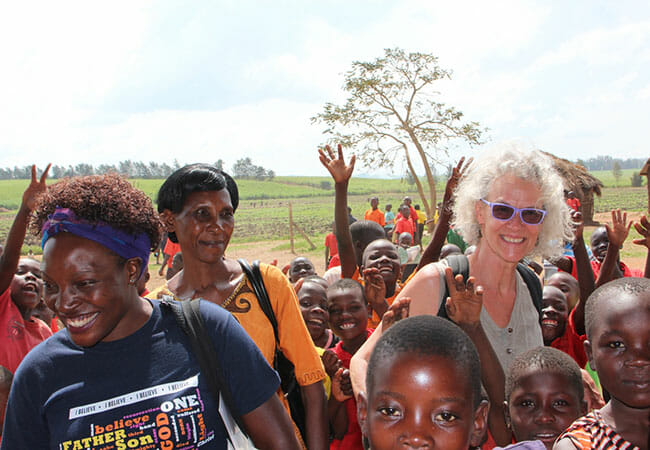 Ellie started The MoonCatcher Project after hearing a friend, Denise Stasik, speak about a humanitarian trip to Zimbabwe. While there she met women using bark, banana leaves, old clothes and newspapers to manage their periods. Some even dug a hole in the ground and sat on it for a week because disposable sanitary products were inaccessible and cost prohibitive.

In response, Denise put together a prototype for a reusable pad that she shared with Ellie, who quickly picked apart the design. As the daughter of a dress manufacturer, Ellie learned how to sew garments from an early age and once worked as a patternmaker. She knew she could devise something better with a little help from her then college-aged daughter.

“I’d make the pattern and she’d wear it, and she’d come in and say, ‘No, no. It’s leaking here, it’s bunching here.’” Ellie said with a chuckle. “I’m fond of saying … we brought mother-daughter bonding to a whole new level!”

Once she perfected the MoonCatcher pad, the Schenectady, New York, resident recruited friends and associates to help out at monthly sewing bees. Sewing bees and knitting circles were popular in early American history as a way for women to socialize while joining forces to complete a common task – like making a quilt or completing other needle art projects. These monthly gatherings eventually became known as “moon bees.”

“It’s very hard to say no to Ellie because she’s so fabulous,” said Ginger Ertz, who was one of the first volunteers and is now a member of The MoonCatcher Project’s board. “She probably has the strongest social conscious and social justice principles of anybody you could ever imagine.” 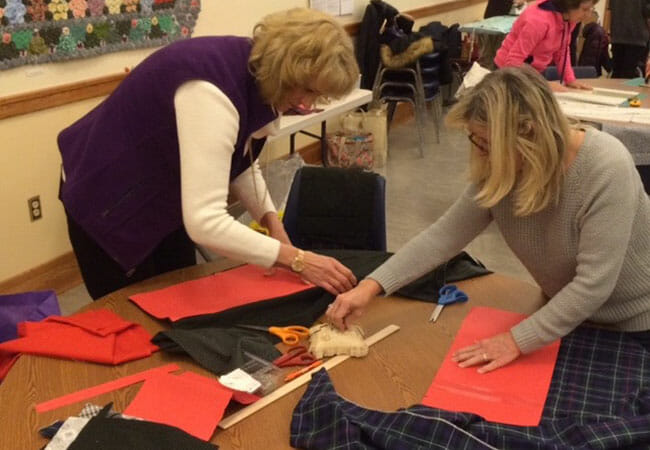 At the moon bees, volunteers usually focus on one task for the night. “Whatever step of the process we need at that time, that’s what we do at that moon bee,” said Ginger. “Like cut a lot of the Tyvek liners. Or we might sew a lot of the straps. Or cut a lot of the waistband cords.”

A MoonCatcher kit costs $5.07 to make, and it includes a drawstring bag that acts as a discreet carrying case, a waterproof bag for used pads and three washable inserts. The inserts are secured with a belt, so that they can work without underwear.

“Most of these women and girls don’t wear underwear because they can’t afford it,” Ellie said. “It’s considered a luxury item.”

Ellie shipped the first batch of MoonCatcher kits to Jinja, Uganda, in 2010. Since then, her organization has expanded to servicing 44 schools in more than nine cities. She has also set up sewing guilds in Uganda and Malawi that employ women as “tailors” to produce the pads locally. Ellie plans to open a new guild in Kenya in the next 6 months. 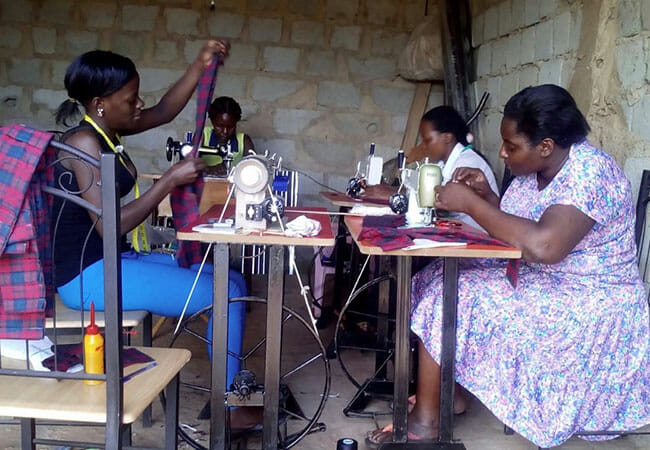 Another big project on Ellie’s to-do list, is to ensure that soap and a washcloth are included in every kit. For the soap, she’s in discussions to partner with Clean the World, an organization that recycles used soap from major hotel brands like InterContinental Hotels Group and Hilton Hotels & Resorts.

The mission of The MoonCatcher Project is not just to make sure girls have the materials they need to manage their periods. Ellie and her volunteers also go into schools to teach them about the mechanics of menstrual management and reproductive health.

“We try to be really culturally sensitive. And, so far, we’ve had administrations say, ‘No, please tell them everything. Answer any questions. We want them to know what’s going on.’ Which is amazing,” Ellie said. 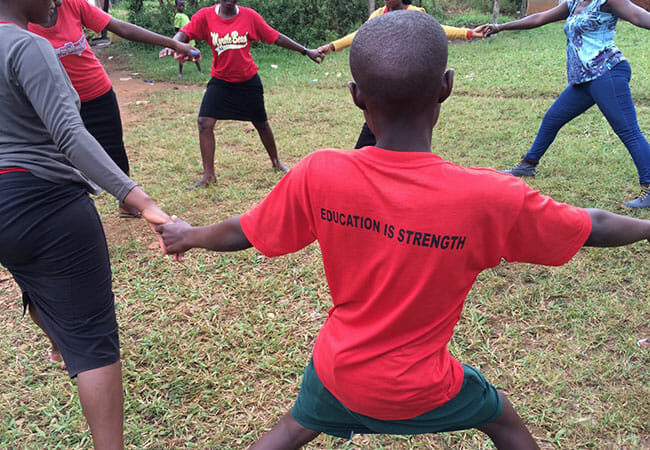 Administrators have also shared that their schools are experiencing improved attendance records and, in some cases, a boost to their popularity once word has gotten out that they work with The MoonCatcher Project. A teacher at St. Kizito Day and Boarding School in Wakiso, Uganda, recounted a story to Ellie of how one student walked miles out of her way to attend the school because they supplied students with MoonCatcher kits.

“The teacher said [to the girl] ‘This school is not the closest one to your house, why are you choosing to come to school here?’” Ellie said. “And, she said ‘Because I hear that you give menstrual pads, so that I’ll be able to come to school every day.’”

Do you want to help Ellie keep girls in school? Here’s how you can make a difference: request supplies for 25 kits to sew and ship back to Ellie; organize a moon bee in your area; donate materials; or follow The MoonCatcher Project on Facebook to help spread the word!

When Startups Take on Gender Inequality, Women and Girls Win

Fulfilling her Grandmother’s Last Wish, She Changes the Life Trajectory of Vulnerable Girls

4 Ways to Volunteer in Support of Girls and Women