On March 28, more than 4.2 million Americans tuned in to NBC and watched “All Together Now: A Celebration of Service.” That extraordinary event, a tribute to President George H. W. Bush’s leadership in inspiring a nation to give back, filled with powerful profiles of service from across the country and performances from some of the biggest stars in music, was a moment to lift up the entire service sector and point a spotlight on the power of individuals to create change. 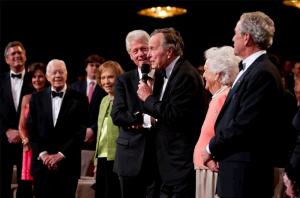 The Tribute was also the culmination of Points of Light Institute’s efforts to demonstrate the power of voluntary action and recruit Americans from coast to coast to commit to their communities. The event, and the activities leading up to it, introduced Points of Light Institute to millions of Americans as the leading enabler of service opportunities.

The event garnered significant public attention and successfully brought focus to the tribute’s bottom line: the power of individuals to effect change. More than 200 press outlets, including Associated Press, NBC Nightly News, Newsweek, Politico, Today Show, Time, USA Today and Washington Post, among others, showcased inspiring stories of service and the change ordinary Americans can make in their communities. Many of these stories included a strong call to service.

These stories of individuals making profound change were also pushed forward by a generous, bipartisan group of members of Congress, including Speaker of the House John Boehner and Senate Majority Leader Harry Reid, who celebrated service by posting tributes on our innovative Tribute Wall. That helped inspire more than 220 Americans to post their own tributes to points of light – people making changes in their communities – and launch what will certainly be a living celebration of service. A special group of pundits, politicians and thought leaders, from Tucker Carlson to Terry McAuliffe and Maria Shriver to Dana Perino, came together to serve as the Tribute Ambassador Corps, tweeting a commitment to service to more than 2.4 million collective followers. 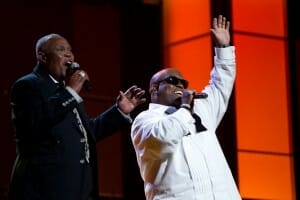 Americans responded with their own support for service. “All Together Now: A Celebration of Service” even showed up in pop culture with clips showing up in the monologues of the “Late Show with David Letterman” and “Conan.”

And momentum continues to grow.

While the Tribute was a unique moment in the history of our national commitment to service, it is just the beginning. The new community inspired by this campaign must be nurtured and directed to meaningful voluntary action. With your continued support, we are poised to build on this foundation and accomplish great things together.