Steve Gustafson took a recent volunteer project as a teaching moment for his kids, Thomas and Andrew, ages 10 and 8. The family joined volunteers from the Schenectady, New York, GE Volunteers Council, their family and friends to pack 369 bags with food that will be provided to local school children in need. 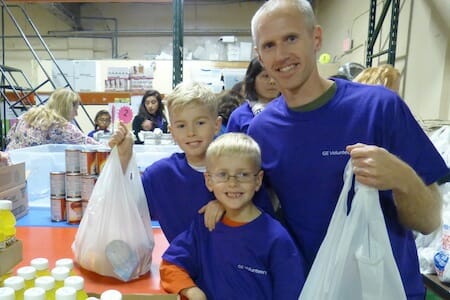 From left, Thomas, Andrew and Steve Gustafson, show two of the bags they packed with food for the City Mission of Schenectady’s Weekend Backpack Program.

Gustafson, manager of the GE Global Research Knowledge Discovery Lab, remarked that seeing how much better behaved his sons are when they’ve eaten and slept well was a reminder that not every child has those same basic needs met, “and it’s important to give other children that same opportunity.”

The Gustafsons, helping the City Mission of Schenectady’s Weekend Backpack Program, were contributing to the good deeds GE employees are undertaking around the world this month as part of the GE Global Month of Service. GE and Points of Light have come together to support and encourage GE employees to address issues that matter most in their regions.

GE volunteers in Schenectady packed in each bag a box of rice mix, bag of pasta, drinks, can of chili, Nutrigrain bars, graham crackers and loaf of bread.

“The difference this program makes for children who are food insecure is clear,” said the City Mission’s Kathy Carney, program coordinator for the Weekend Backpack Program. “Their attendance is better at school; because they aren’t hungry from the weekend they are ready to settle down on Monday morning; their grades are up and they are less likely to get into trouble.” 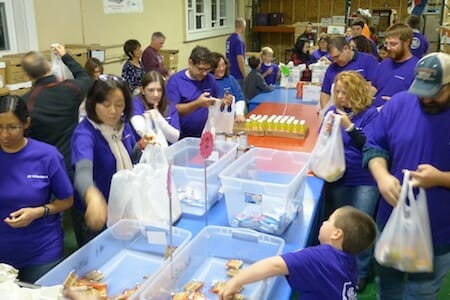 Even at 10 years old, Thomas Gustafson could appreciate the significance of the volunteers’ service.

“It’s important that children be able to eat well so they can do well in class and have a great future. I feel good about giving back to my community,” he said, while his younger brother said he liked knowing he was helping children whose parents couldn’t afford to buy them healthy foods.

Principal Engineer Adam Rasheed, who helped organize the backpack event, said he was thrilled that so many GE volunteers brought their families to participate, adding, “It’s important that GE, as a corporate citizen, help those in our community.”

Biologist Lisa Lowery was one of the volunteers who specifically was looking for an activity to which she could bring her son Dean, 7. “It’s important for him to see how lucky he is, and to have an opportunity to open his eyes to see what others don’t have,” she noted. “I’m hoping that by starting him volunteering young, he will continue to help others as he grows up.”

That she accomplished her goal that night was evident, as Dean reflected, “For children who don’t have food, it’s pretty sad, and when they get to see the food we packed, they’ll be happy.” 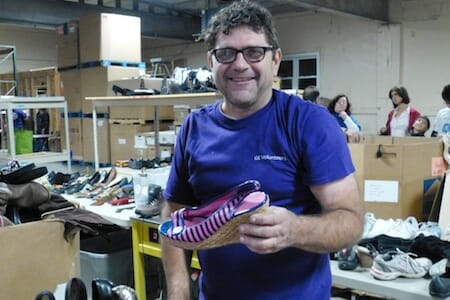 GE volunteers, such as Kent Sante (pictured above), helped sort shoes donated to the City Mission of Schenectady after they finished putting bags of food together.

For PR Subramanian, manager of the High Temperature Alloys & Processing Laboratory, packing food for impoverished children was personal. “I’ve seen children who don’t get a square meal a day, and I’ve always felt we should do more so children don’t have to worry about where their next meal is coming from,” he said.

For Senior Scientist Kareem Aggour, it was especially important for him, as a Muslim, to show that “we positively contribute to our community in the U.S.,” while his 8-year-old son Ayyoub said he wanted to help the poor have a better life, “not living by luck, but through people helping the poor. That’s what I thought about when I was packing the bags.”

“I’m amazed at the number of people who volunteered for this event,” said co-organizer Tahira Komal, manager, marketing and commercial operations for GE Ventures. “We needed only 20 people, had 35 sign up and even had to turn volunteers away. That people would choose to come here on a Tuesday night after work instead of going home demonstrates that there’s still good in this world.”