Today’s guest post is written by Eric Roache, a yoga teacher, blogger and founder of ForWorld Thinking, a nonprofit organization dedicated to promoting cross-cultural exchange and understanding. He has volunteered and traveled around the world and uses those experiences to help advocate for global community and social change.

The first time I ever traveled overseas alone, I headed off to Australia and Nepal to volunteer abroad for five months. It was a nice transition stopping a month in Australia to save the rainforests for a young American who had never really been exposed to other cultures or the harsh realities of the developing world. Lush landscapes, crisp night air and the familiar values and perceptions of Western culture in the other volunteers from Europe and America. It gave me a chance to get over being away from home, friends and family, and to settle into life on the road before the real adventure began. As I rode the midnight plane from Brisbane to Kathmandu by way of Bangkok, I watched the moonlight glimmer on the Pacific and tried to quell the anxiety and doubt swelling up inside my stomach. That night was the quietest and clearest my mind had ever felt as I stared into the darkness, an eerie calm to counteract the knots in my stomach.

Hours into my stay in Kathmandu, I wandered the chaotic streets of the city, far from the safehaven of touristic Thamel, putting my complete trust in two other volunteers who arrived earlier than me as I followed blindly. It was a strange rush and an assault on the senses that put me oddly at ease, and from that day forth I knew I would be forever at home in the unfamiliar. That moment of truth was important, because it set the stage for everything to come, in Nepal and beyond, and it allowed me to embrace fully the experience of life in cultures vastly different from my own without fear.

I will never forget the day I arrived in the small Nepali village where I would teach. I was handed off to a gentleman who spoke almost no English, led through the village in the waning light of sunset to a house across the yard from school and sat on the porch with no explanation as people gathered and watched but said nothing. There we all sat around together in darkness for more than an hour until my host father, Damber, finally arrived to greet me. It was his house we sat outside, and his wife was one of the people waiting with me, but she did not invite me inside. This incident sticks with me because it taught me to show respect and deference to the place, the people and the community in which I was living. I was the outsider here, and I could not count on anything I knew or had learned before, so I threw it all out the window and prepared to learn everything all over again through the eyes of Nepal.

The months that followed were astounding in their simplicity and beauty. But nothing had a greater impact on my life than meeting Himal Waiba. He was a fellow teacher at school, and I was immediately struck by how genuine and compassionate this humble young man was. It resonated in his every word and action. We quickly became like brothers, spending every moment we could together. Every barrier that might normally separate us only served to bring us closer together because of our openness to one another. Never have I 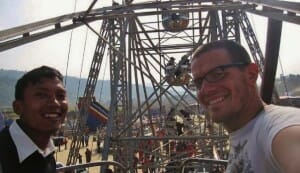 connected with another person on such a deep level with no effort and no need for words. Himal changed me, he inspired me and he helped become the person I always wanted to be but never knew I could before I  met him.

To me, that is the clearest example of the benefit of cross-cultural exchange. When you let go of everything you know and give in to your experience, which international service forces you to do, all your walls come down. You allow your whole understanding of the world to be changed and opened by others with a different set of values, beliefs and experiences than your own. And in the end, that paradoxically shows you that we are in fact the same after all.

Together, Himal and I have since embarked on a journey of community service, global community building and cultural exchange. To learn about the orphanage Himal founded in Nepal and find out how you can help, visit Joining Hands Nepal. To learn more about my organization and how we help, visit ForWorld Thinking.