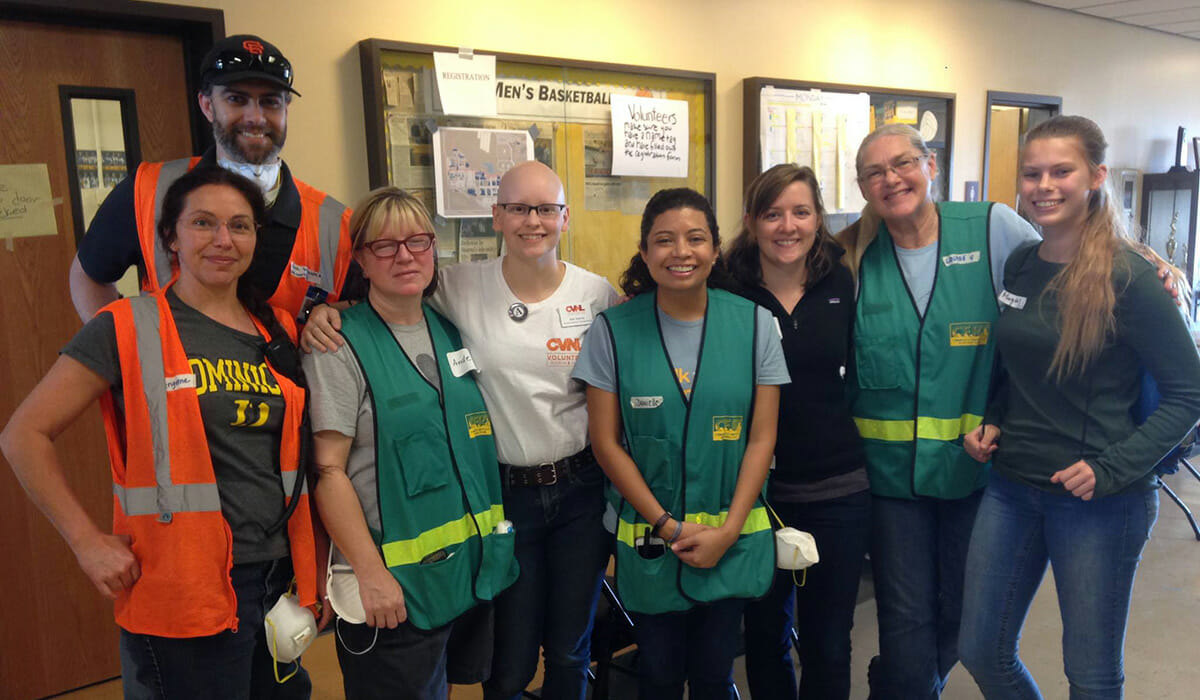 Volunteers, including a family of four, stepped up to staff the Napa emergency volunteer center during the North Bay Wildfires in 2017.

Over the past few decades, several major disasters have tragically shaken communities across the United States. From natural disasters like hurricanes, tornadoes and wildfires, to man-made disasters like the Flint water crisis, these events test the unity, strength and resilience of our communities. The path to recovery and rebuilding is long, often continuing for years after a disaster strikes – and this work is most successful as a collaborative, cross-sector effort that includes the ongoing support of volunteers. Disasters can be scary and unpredictable, but the incredible individuals who step up to help represent the great humanitarian spirit that we see rise up, time and time again, in moments of need. As local experts in volunteer management, Points of Light Global Network affiliate often play a critical role in managing volunteers throughout response and recovery efforts.

Wildfires are incredibly powerful and can gain speed rapidly, quickly devastating entire neighborhoods. The North Bay Wildfires caused thousands of families across Northern California to lose their homes and businesses, and brought more than 8,000 firefighters in to battle against raging flames.

In Napa, Marin, and Sonoma counties, the Center for Volunteer & Nonprofit Leadership serves as an emergency volunteer center, overseeing spontaneous volunteers and donations in the aftermath of a disaster. We spoke with CEO Linda Jacobs and Elaine Tokolahi, director of volunteer services, to learn more about their disaster preparedness, response and recovery efforts – and the critical role played by volunteers.

How did the North Bay Wildfires impact your community or region, and what was your organization’s role in the disaster response and recovery efforts?

In the last four years, CVNL has stood up an emergency volunteer center multiple times due to fires and earthquakes. The most recent disaster that struck our region was the North Bay Fires, which started on Oct. 9, 2017. We operated two EVCs simultaneously in two different counties. In Napa, we managed more than 2,000 volunteers who staffed three evacuation centers and shelters, and in Marin we managed nearly 1,000 volunteers who staffed one large evacuation center and shelter. Following the fires, we partnered with Redwood Credit Union to distribute $1.621 million to people impacted by the fires. We also distributed grants to nonprofits that provided direct services to people and animals impacted by the fires. CVNL is still involved in Napa’s long-term recovery by recruiting and managing volunteers for Napa’s Long-Term Recovery Group, comprised of nonprofit and government agencies dedicated to the whole community’s recovery.

How did this disaster impact your community?

In Napa County, more than 600 families lost their homes in the fire, many more people lost their jobs because businesses burned down, and thousands more residents suffered financially due to the weakened economy. Nonprofits saw a significant increase in the number of clients and in the severity of client needs.

What role did volunteers play in supporting your organization and the community, both in the immediate response and long-term recovery?

During the fires, volunteers stepped up to fill nearly every role in the shelters and evacuation centers. They cooked and served food, set up cots, took care of animals, interpreted between Spanish and English, and sorted mountains of in-kind donations. Volunteers with professional affiliations provided medical care and childcare. AmeriCorps members filled volunteer lead positions. After the fires, volunteers continue to help. They rebuild homes and schools, plant trees, hold donation drives, and rally their coworkers to volunteers alongside them.

What do you want eager disaster-relief volunteers to know before they begin serving affected communities?

Registering in advance through the organization that manages the emergency volunteer center guarantees that you will be used if there is a need. Just showing up often gets in the way of the first- and/or second-responders. We recommend getting training ahead of time, as knowing what the roles are and how the process works in advance makes service smooth and more supportive during a chaotic time.

What lessons has your organization learned, and what advice do you have for other volunteer management organizations that may face a similar situation in the aftermath of a disaster?

As the old adage says, “practice makes perfect.” Dedicate time to practice your emergency plans and continuity of operations plans. Learn how to serve as an emergency volunteer center by practicing at least once a year. Work with your local government agencies so that they know how to integrate volunteers into their own plans. Ultimately, you will be staffing the response efforts that they lead, so show them that volunteers can be assets during disaster response. Government agencies often fear that spontaneous disaster volunteers will become liabilities, but when we strategically plan ahead for volunteer involvement in response, those fears go away and volunteers can significantly contribute to disaster response efforts.

Is there one particular moment or memory that stands out to you as you think back to this period of response and recovery?

Disaster volunteers come from all walks of life, yet share the same goal: alleviate suffering. One particular memory comes to mind. The local Islamic Center learned of our need for shelter volunteers, so three teenage sisters who worship there signed up for an evening shift at a shelter. They said they finished their homework and came right over, with their parents’ permission. On the second night, they volunteered again and brought their cousins to help. On the third night they brought their parents, too. By the last evening shift, the original group of three sisters had grown into a group of 12 volunteers, who stepped in to feed people, help the elderly walk around at  night, gave water to sleepy children, signed-in new fire evacuees, and did anything else needed to make the shelter a warm and welcoming place.

In the event of a disaster, Points of Light supports first-responder organizations, like FEMA and the American Red Cross, connects with Voluntary Organizations Active in Disaster chapters across the United States to assess the situation, and coordinates with our Points of Light Global Network affiliates and partner organizations in the affected areas. Remember – in the immediate aftermath of a disaster, it is critical that people who want to volunteer, especially those outside of the immediate area, do not self-deploy. Connect with local organizations responding to the disaster to find out the best way to get involved.