This post is by Mary Bruce and Ben Duda, co-executive directors of AmeriCorps Alums, the only national network that connects the nearly 900,000 alumni of all AmeriCorps programs to the people, ideas and resources that support their commitment to a lifetime of service.

Do you know any ruthless optimists? You know, the friends who just won’t take no for an answer and instead organize the best food drive you’ve ever seen? Know any rugged idealists, who can make a fundraiser out of nothing in no time to support disaster relief efforts? It’s always more than just “something,” it’s fabulous, and the local paper features them as “everyday heroes” because they made it look so easy.

If you know folks like these, you probably know humble, hard-working AmeriCorps alums.

Today, at the White House and in all 50 states, the nation will celebrate the 20th anniversary of AmeriCorps. Since 1994, nearly 900,000 individuals have joined AmeriCorps, providing more than 1.2 billion hours of service that’s done what it was designed to do: “make our people safer, smarter, and healthier.”

AmeriCorps members don’t take the easy road. We break tradition, and our parents’ expectations, by taking a year on (it’s not a year off). We serve, even if it’s not the cool thing to do. We serve when it’s hard – probably because it’s hard. 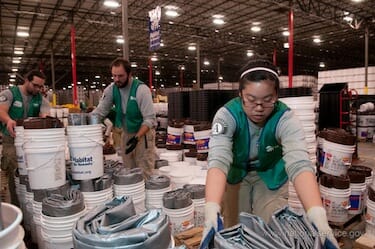 AmeriCorps members pack supplies bound for Haiti after the earthquake there.

We help kids get back on track to graduate. We organize community days of service. We set up data systems for small nonprofits. We log sweaty hours in the California back-country doing forest fire remediation and we will be among the first responders when the next tornado or hurricane strikes.

AmeriCorps members don’t stop serving when our year’s up. When we joined AmeriCorps, we promised “to get things done for America… this year and beyond.” We were made in AmeriCorps and nearly all of us still find ways to serve every day.

Kyle Kimball served with AmeriCorps in 1994 doing AIDS Outreach in Birmingham, Alabama. Now 42, he’s the president of the New York City Economic Development Corporation. Responsible for one of the largest public development entities in the country, Kyle says, “AmeriCorps was a critical training ground for me, making it possible for me to succeed in this work."

Dayna Long also served in 1994. Her year as a peer health educator inspired her to become a pediatrician at UCSF Benioff Children’s Hospital. “I am still trying to tackle poverty and inequity in our youth,” she says, “just like I did in AmeriCorps.” 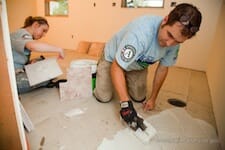 AmeriCorps members work on a Habitat for Humanity home in Milwaukee.

This week, we’re sharing some of AmeriCorps Alums’ most powerful stories because we know that while service changes lives and communities, it also catalyzes careers with impact. Like Kyle and Dayna, two-thirds of all AmeriCorps alums go on to careers in nonprofit and government roles. A health educator turned global social entrepreneur. A literacy tutor turned corporate philanthropist. A legal aid worker turned gubernatorial appointee.

AmeriCorps represents the best of America – hard work, opportunity, bipartisanship. Launched by President Clinton in 1994, AmeriCorps was expanded by President George W. Bush after 9/11. In 2009, the Serve America Act, heralded by Senators Hatch and Kennedy, called for a massive expansion of national service opportunities.

Sadly, that didn’t happen. The number of AmeriCorps positions now lags well behind goals authorized by the Serve America Act. That’s why we’re working closely with the Aspen Institute’s Franklin Project, which “envisions a future in which a year of full-time national service — a service year — is a cultural expectation [and] a common opportunity.” We’re also working to ensure that all AmeriCorps members and alums are connected with the people, ideas and resources that support their commitment to a lifetime of service.

AmeriCorps alums are the ruthless optimists and rugged idealists who serve at the highest levels of business, government and nonprofits. We vote. We serve on boards. We show up for the creek cleanup. We’ve even been known to empty the dishwasher at work and refill the coffee maker. Why? Because we’re AmeriCorps alums; we get things done.

We have an opportunity, and an obligation, to grow and strengthen national service opportunities and life beyond them. Failing to do so is a disservice not just those who want to serve and have served, but to our country, which so desperately needs more civic leaders.