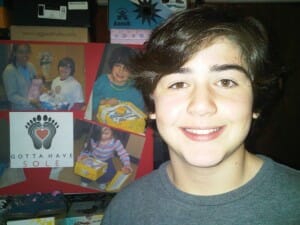 “I’m sorry, honey.  You can’t go to school today. It’s your brother’s turn to wear the sneakers and we don’t have another pair for you.”

It is unfathomable that this quote could come from someone in the United States.  In fact, it is from a mother whose family was staying at a homeless shelter in Rhode Island, after losing their own home. The ongoing economic downturn and mortgage crisis across the country has forced many families to seek shelter assistance. Often, they arrive with nothing but the clothes on their backs. Most have lost everything while attempting to save their homes.

My first turning point came when I was 5 years old when I started visiting homeless shelters. I met children who laughed and played like I did but didn’t have shoes, or had shoes that were falling apart. Sharing footwear with a family member was common and some children couldn’t go to school because it wasn’t their turn to wear the shoes that day. There I was wearing my new light-up sneakers, feeling horrible that I had them when these kids had nothing. I desperately wanted to help.

Because I was so young, the only thing I could do at the time was to donate my gently used footwear, which I did for several years. I knew this helped some of the kids, but it didn’t help all of them. I was frustrated that I didn’t have enough shoes for all of the children and hoped that someday I could provide homeless children with the properly sized shoes that they deserved.

Seven years after I realized that I could not stand by without helping homeless children in my community, I had a second transformative experience. I was turning 12 and I needed to identify a community service project for my Bar Mitzvah.  I still remember my eyes lighting up when I told my parents that I wanted to fulfill my dream of donating brand-new footwear to children in homeless shelters! I had learned about nonprofits and wanted to start one of my own so that I could keep it going after my Bar Mitzvah was over. I drew a logo, and named the organization, Gotta Have Sole Foundation, Inc., which is now a 501(c)(3) public charity.

My Bar Mitzvah was in 2010 and I continue this important program today and plan to do so throughout my lifetime. To date, I have donated new footwear to almost 2,000 children in homeless shelters across the United States. Children need proper footwear to go to school, to be able to play sports and to participate in social activities with their peers. My goal is to make sure all children, living in homeless shelters in the United States, have the footwear they need so that they can have the same opportunities as other kids. I also hope that by providing children with new footwear, that it will give parents one less thing to worry about so they can concentrate on finding a home instead.