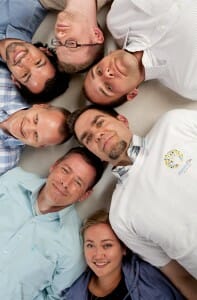 Andy Nelson pictured bottom right with other Hands On colleagues

The theme for this year’s National Conference on Volunteering and Service is “Turning Point.” At Points of Light, we are highlighting turning point stories – stories about the moment or moments that inspired your service. Today’s turning point comes from guest writer, Andy Nelson, former Executive Director of HandsOn Greater Portland. Andy serves on the city of Portland, Oregon Parks Board and state of Oregon Commission on Volunteering, coaches his son’s sixth grade basketball team and ruins perfectly good walks outside by playing golf.

I listen with admiration, and a little envy, when I hear people in the HandsOn movement trace their motivations to their roots. They talk about growing up in families that gave back. They talk about coming up in communities that helped each other. They reference role models; giants of service they knew by name.

I listen with envy because this wasn’t my experience.

Not to say that I came up without values. They were different. Maybe it was the times. But doing good and helping others came with suspicion. Better to take care of your own. Government safety net services were there for those who couldn’t. Sure, we had newspaper and food drives, but nothing resembling the legions of people who today consider volunteering a way of life. Great things were happening back then. They seemed less well attended.

The turning point for me happened when, as a young newspaper reporter, I discovered what I had been missing. One cold, November evening 22 years ago in East Hartford, Conn., I discovered a make-shift soup kitchen started in a church basement. What a great story! Homelessness was still sort of a new thing, at least in the numbers we were beginning to see back then. I began interviewing some of the people in line when a hand tugged at my arm.

“What are you doing?” asked the woman, who was about my age and who I recognized as the person running the soup kitchen. “Please don’t talk to these folks and out their names in the paper. They will never come back.”

Stopped in my tracks.

It wasn’t necessarily this one incident. But it was seminal among many that led me to redirect my life to “doing good.” In many ways, I had no idea that one could actually do good as a life’s career. At least, it was really nothing that I had considered up until that point.

Things have changed, for sure, in the past 22 years. Clearly, not all for the worse. So many more young people are growing up with service. They are learning to do good as a way of life. They are many years ahead of me. For so many, there may not be such a defining “turning point” as there was for me. At least, that’s the goal I am working towards.