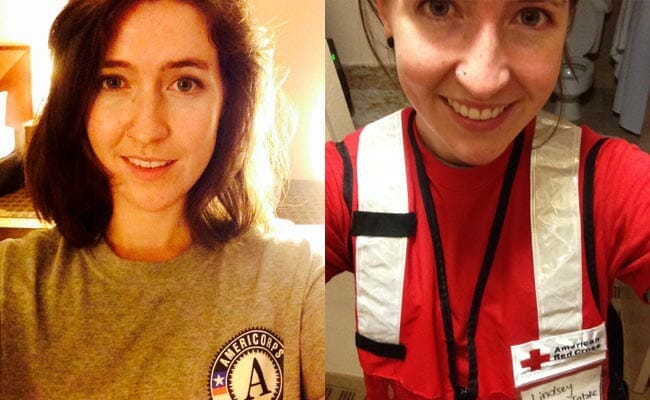 As Hurricane Harvey moved across Texas, causing massive flooding and damage, AmeriCorps Alums partnered with the American Red Cross to mobilize skills-based volunteers from the organization’s national service alumni network – specifically those who have served with FEMA Corps or NCCC, had experience with disaster response, and who could travel to Texas to assist with immediate recovery. Volunteers, like AmeriCorps alum Lindsey Earl, quickly responded and helped provide on-the-ground support in Houston.

Lindsey arrived in Houston on Aug. 19 to begin an internship with local nonprofit Change Happens, part of her graduate school program requirement at the Stevenson Center for Community and Economic Development at Illinois State University. She had heard news coverage of an impending hurricane heading her way, but could have never anticipated the scope of what was to occur. 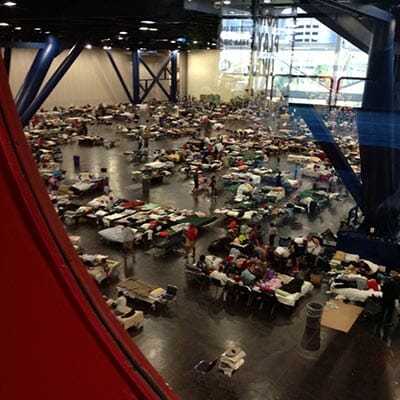 Exactly one week later, as Hurricane Harvey tore through Lindsey’s new community, she answered a phone call in the hotel where she was taking refuge. The Red Cross needed her help. Lindsey arrived at the local Red Cross headquarters and was asked to use the skills she had gained in AmeriCorps to support many tasks required in the response and recovery effort. Initially, she oriented incoming staff and created a resource guide for flood victims. Within several days, she moved to the George R. Brown Convention Center emergency shelter to conduct volunteer intake, where at times she was the sole manager as more than 6,000 volunteers streamed in.

Lindsey recently returned to her internship at Change Happens, where she will lead disaster recovery operations for the organization. She shared, “I’ve become extremely connected to the city of Houston. I truly can see the beauty in it. So many people poured in to assist those in need. It was phenomenal to watch people so eager and willing to help their neighbors.”  No matter what comes next, Lindsey will continue to get things done, building upon her AmeriCorps NCCC experiences and applying the training and coursework from the Stevenson Center.

Learn about Points of Light’s disaster response efforts, and how you can help.