Read about how folks in Maryland are preparing for disaster. To help your family take action, visit Good & Ready, where you’ll learn how to create a disaster plan, build a preparedness kit and more. 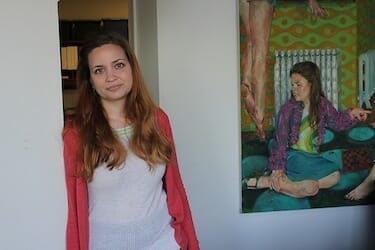 The door to Robbie Horwitz’s childhood home was boarded up. That was the first thing she noticed when she returned from a hiking trip to the split-level house that she shared with her mom in Linthicum, Md., near Baltimore.

The windows were broken, too, and there was the deep, pungent smell of smoke.

Then Horwitz remembered: She had left a candle burning on a table in the living room.

Horwitz tears up as she recalls that day. The home “was the only place I had ever lived,” she says. But after the fire, “every object was covered with a greasy, dirty film. … I had this baby quilt that I had since I was little. That disappeared and it was irreplaceable. I felt like [the fire] ended a section of my life.”

Horwitz says her family wasn’t prepared. The smoke alarm did not have working batteries. Papers were scattered, the important ones mixed with those they didn’t need. 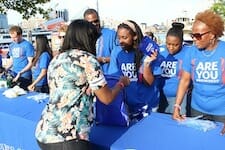 An event participant makes her way down the disaster kit assembly line, as volunteers help her complete her kit.

To prevent more stories like Horwitz’s, the Allstate Foundation and Points of Light have teamed up for a 14-city tour to encourage emergency preparedness. "Eighty-five percent of families aren't prepared for a disaster," says Shelva Clemons, an Allstate spokesperson. "We want to be in the community to raise awareness.”

While the band New Romance performed a catalogue of 80s hits and children blew bubbles nearby, volunteers explained to guests why each item is needed as they filled their bags. 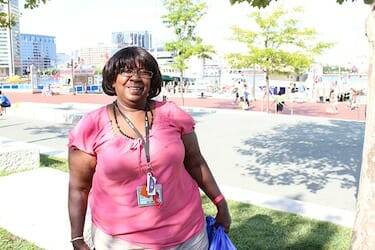 Locals, as well as visitors from Pittsburgh, Houston and other cities, said that they were most surprised to learn that water that isn’t commercially bottled has an expiration date. It should be replaced every six months. Some were also happy to see that each kit contained a checklist showing items for a complete disaster kit.

For Dawn Reed, the event hit close to home. Reed’s aunt lost everything in Hurricane Sandy after her house flooded. She had to evacuate her home on Staten Island, N.Y., heading to Brooklyn to live with her daughter for a year while her house was rebuilt. (Click here to hear what Reed learned from her aunt’s experience.)

Sandy hit Marylanders hard too, especially in coastal regions. Many areas are prone to flash floods throughout the year because of the frequent thunderstorms that are common in the state. These flash floods, which are considered dangerous because people aren’t expecting them, occur within six hours of a rain event.

To prepare for these times when it’s a challenge to get to stores, Maryland resident Althea West keeps a stash of water and canned goods. “It’s a small one,” she says, adding that the little things that you set aside make a difference. West has learned from experience: She’s been stranded inside during blizzards in the past.

About the emergency preparedness event, West says, “Everybody needs this.”