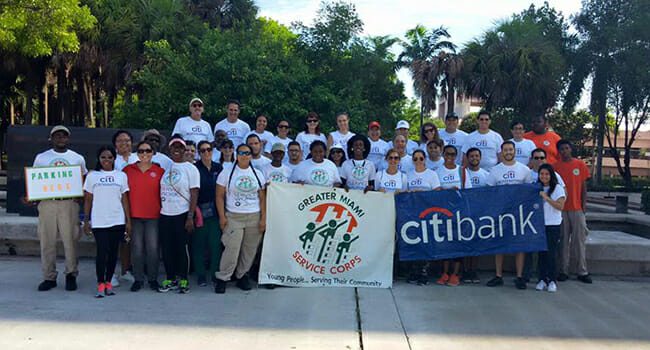 A key pillar of Points of Light’s ServiceWorks program is using volunteerism as a pathway to college and career readiness. And there aren’t many better opportunities for program participants – Service Scholars – to gain firsthand experience and exposure to the value of service than Citi’s Global Community Day.

As a grantee of the Citi Foundation’s Pathways to Progress initiative, ServiceWorks host sites partner with Citi employees across the United States to perform acts of service several times a year, culminating with Global Community Day. This gives young people in the program a chance to make a positive impact in their hometown while playing a role in an event that’s happening in thousands of local communities around the world. But it’s so much more than that.

Great to see this ongoing commitment to community engagement from @Citi Fdn and #CitiVolunteers: https://t.co/wKHkWEhChJ

Glad so many of our events include @IamServiceWorks VISTA’s and Scholars https://t.co/aOnYO8pBUc

While working alongside Citi Volunteers on these projects, Scholars are organically building on some of the core principals of the program. They’re getting to practice skills like communication, teamwork and leadership. By connecting with Citi professionals, they’re not just expanding their networks – they’re expanding their minds in terms of what they believe is possible for their future. Global Community Day is an exceptional chance for them to be part of something bigger than themselves.

Some of the day’s highlights included:

In Boston, English- and Spanish-speaking Scholars were matched with Citi Volunteers for personal success coaching. Maria Grande, an AmeriCorps VISTA member who helps lead ServiceWorks for Boston Cares, said it was a useful and unique experience for them: “The Scholars were really interested in what they were learning. Nobody had ever sat them down before and shown them how to write a resume or set S.M.A.R.T. goals.” 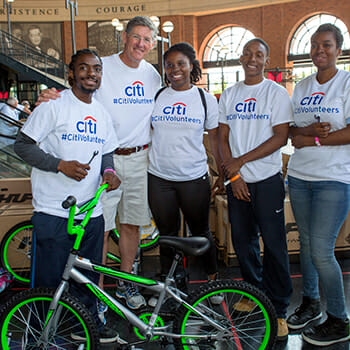 Scholars from The Door in New York enjoyed a day of cultural learning at the Metropolitan Museum of Art. Teaming with Citi Volunteers for various activities, Scholars quickly established a rapport with Citi’s employees that led to meaningful lunchtime conversations about possible career paths. Despite living in New York for most of their lives, for several of the Scholars, it was their first opportunity to visit The Met.

Global Community Day had extra meaning in Chicago. Graduates of the ServiceWorks program at Casa Central returned there to do beautification work on the space where they received their ServiceWorks training – and often return to for after-school time.  Leading such hard work alongside the Citi Volunteers provided a chance to polish the relationship-building skills learned in the program.

But to Karina Cabrales, one of the two VISTA Members there, doing it early on a hot, Saturday morning – when it wasn’t required – spoke to the essence of ServiceWorks: “They’ve realized the value of community service. It was really important for them to come back and give to this space they consider their own.

Finally, back in New York, Scholars from the Abyssinian Development Corporation got to build bikes for needy children with Citi’s CEO, Mike Corbat.

To see more images from this day of global inspiration and local impact, search the hashtag #CitiVolunteers on Twitter and Instagram.