This post is by Eric Nankervis, program manager of disaster services at Points of Light. 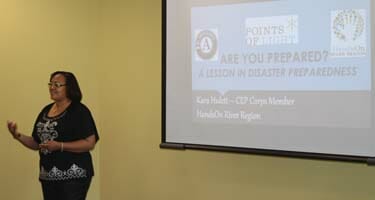 As Izola Nichols stood in her house, floodwater rising up her calves, she remembered the words she heard during a preparedness training session two weeks prior: "Grab your medicines and prescriptions. Get your purse and passwords. Grab your evacuation kit and a change of clothes. And get out!"

The training was one of a series led by Kara Hulett, a Points of Light Community Emergency Preparedness Corps member, in the Pratt City neighborhood of Birmingham, Ala. No stranger to disasters, Pratt City was devastated by tornadoes on April 27, 2011. Hulett's presentation focused on tornado awareness and safety, but as Nichols witnessed, one needs to be prepared for anything, at any time.

"I knew the hazards of a tornado," Nichols recalled, "but was I prepared for a flood?"

She had stayed up all night with her husband, a local pastor, watching the weather and monitoring for signs of a tornado. Only after the storm blew over did they get to sleep. At 4 in the morning the pastor was awakened by a strange noise. As he got out of bed to investigate, his feet hit water. 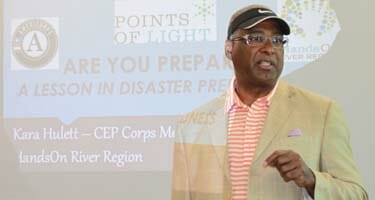 Birmingham, Ala., Mayor William Bell talks about the importance of preparing for disaster.

The April 7 storm flooded the nearby creek and water was gurgling through the home's floorboards. He went outside and witnessed the water continuing to rise – off of the front steps the water was up to his waist.

The pastor waded through the rising water to get the family's small boat as Nichols gathered their supplies. "You prepare for one hazard, and forget there are others," she said. "But I knew what to get. There are only a few things you can grab and you only have a few precious minutes."

Nichols credits Hullett's presentation for helping her family prepare for the flood. The training Hullett offered is part of her service as an AmeriCorps member. Serving at HandsOn River Region in Montgomery, Ala., Hulett had partnered with Birmingham City Council member Marcus Lundy and Hands On Birmingham to better prepare the citizens of Pratt City in the event of another disaster. (HandsOn River Region and HandsOn Birmingham are part of the Points of Light's HandsOn Network.)

"Storms in life do come," said Lundy. "How you prepare is what is important." 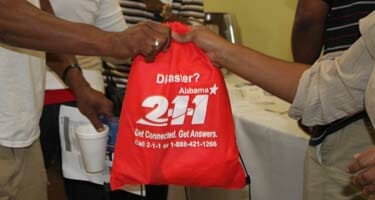 Since the 2011 tornadoes, Pratt City has been rebuilt with new homes with storm cellars and new infrastructure, including a new library and fire station. Yet more than a third of the residents did not return.

"The majority of the people have hung in here. They have endured," Lundy said. "And these trainings cannot be more important. "

The Nichols family's story proves it. Nichols and her husband were able to take their son, their dog, a few precious belongings, a disaster kit and what they learned at the preparedness training to evacuate their house safely. Lundy invited Nichols to share her story last Saturday at another disaster preparedness training session, as a part of a tornado memorial day in Pratt City.

With basic disaster kits provided by Lundy, HandsOn River Region and HandsOn Birmingham – all assembled by local schoolchildren – the training session was kicked off with welcoming remarks by Birmingham Mayor William Bell, who praised the timing of the training and warned residents of the potential of tornadoes that followed earlier this week.

Fortunately, Pratt City was spared this time but its citizens are ready. "Being prepared on the top end is vital," Nichols told those at the training event, again led by Hulett. "You will learn what you need to get, and when you need to get out." And sometimes, that is just in time.

The Community Emergency Preparedness Corps is an AmeriCorps program implemented by Points of Light, with funding from The UPS Foundation and the Corporation for National and Community Service. With 22 members serving in 13 sites across the United States, the program helps Americans better prepare for and recover from disasters.