This post comes to us from the United Way of Greater Austin in Texas, part of Points of Light’s HandsOn Network. 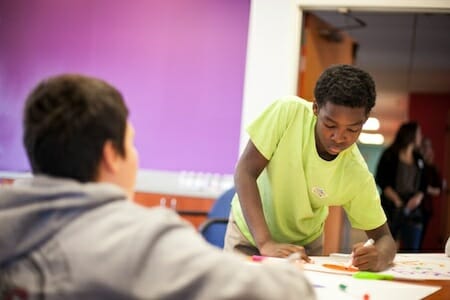 It’s 4 p.m. on a Tuesday, and the halls of Webb Middle School are growing quiet. However, three students aren’t part of the stampede of their peers racing for the exits.

They’re in a classroom on the second floor, making phone calls to local business owners to enlist help in putting on a pancake breakfast for families staying at the Ronald McDonald House.

These are the students of United Way for Greater Austin’s Volunteer Project Leaders (VPL) program, and this isn’t their first rodeo.

The kids in the VPL program at Webb have been conducting volunteer projects to help out around their community since the program’s inception four years ago.

They’ve organized and led campus cleanups, campaigns to gather thank-you notes for school librarians, community needs assessments, and a host of other initiatives designed to encourage their classmates and neighbors to give back to their community.

While the idea of middle school students dedicating so much of their free time to philanthropic projects may seem extraordinary to many, it’s a no-brainer to the VPL kids.

“What would you do if you just saw someone throwing trash around your neighborhood?” says LaDascious, an eighth grader who’s been a part of the program since he arrived at Webb Middle School.

He’s just left a voicemail for a manager at Kerbey Lane Cafe, a frequent United Way of Greater Austin collaborator, asking for pancake mix donations and any helping hands they could provide.

Kids in the program get many opportunities to practice this sort of outreach, helping them to develop a set of communication and leadership skills that will be useful to them throughout their lives.

LaDascious believes being part of this group has taught him to think about people other than himself. According to Nikki Krueger, United Way of Greater Austin’s director of volunteer engagement, who oversees the program, that’s exactly the point.

Krueger believes that by providing students with the tools they need to create positive change in their communities at an early age, they’re instilling a “philanthropic gene” that will last a lifetime – and it seems to be working.

Kids at each of the three VPL programs LaDascious’ sentiments. Chrishana, another program participant, said because of the program, she now “look[s] at the world with a different viewpoint.” Her classmate, Jaylon, agreed, stating, “It has taught me how to be a better person.”

In total, the three chapters have empowered about 150 students to better both themselves and their communities. That’s a lot of young philanthropists, and the work is just beginning.

It’s now 4:30 p.m. at Webb Middle School, and after a long day of classes the kids have hit their limit. They sprint out of the room and down the stairs with that boundless, restless energy unique to middle school students.

It’s an energy they bring to everything they do – including volunteering – and, thanks to the VPL program, it’s an energy that’s helping make Austin greater.

If you are interested in volunteering with the United Way of Greater Austin, visit the Hands On Central Texas website.