In honor of Veterans Day, we will be telling the stories of veterans making a difference in their communities. Meet Spirit Padilla, a member of the Veteran Leader Corps – an AmeriCorps program run by Points of Light. 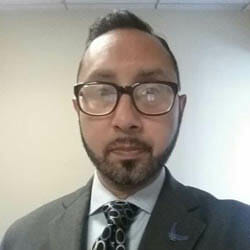 Air Force veteran Spirit Padilla never imagined he’d experience joblessness, homelessness and underlying feelings of despair stemming from his military service. But that’s what the last several years had been like for him until recently.

Raised by a single mother in New Mexico, Padilla, 46, entered the military in 1986, just two weeks after high school. After serving four years – including deployments to Panama and the United Arab Emirates – he decided to leave the Air Force and started looking for a civilian job.

“I had no plan for life,” says Padilla, who has been living in a shelter for the past 14 months. “I was homeless for a few years; I started drinking and got into substance abuse. It took me many years to acknowledge that I had PTSD (post traumatic stress disorder).”

Realizing that his issues were far beyond his control, he quit drugs and sought professional help and a fresh start.

In addition to PTSD, Padilla dealt with the challenge of translating his professional military skills to the civilian job market. He had a hard time adapting to new circumstances and kept moving from one job to another, usually as a waiter, before his potential was realized by a colleague who introduced him to the Veteran Leader Corps (VLC) – an AmeriCorps program run by Points of Light. Padilla signed up as a corps member.

Veterans who join the military soon after high school, like Padilla, can face obstacles after their service when competing for civilian jobs. The VLC focuses on providing employment support services and community engagement opportunities for veterans, by placing corps members at host organizations serving veterans and military families.

The VLC, which engages veterans as part of the solution, serves as a critical component of the Community Blueprint, a coalition of organizations designed to share tools and resources to better serve the veteran community at the local level.

Padilla is about to finish his service at Goodwill Industries in New Jersey, where he talks to veterans about local job fairs and helps with job and resume writing events arranged by Goodwill. During his service, he collaborated with a Fordham University student – a fellow veteran – to create a resource manual to help homeless veterans navigate available services in New York City.

One story that stands out to Padilla is one of an Air Force veteran balancing a family and evening classes. The veteran is unable to cover his full tuition costs with the GI Bill and has worked with Padilla to find support for tuition, housing and food. The veteran landed a job to fill temporary financial gaps and has worked with Padilla to file a successful claim for 30 percent disability support from the Veterans Administration.

Padilla estimates he has had a significant impact on more than 70 veterans and their families since joining the VLC in March 2014.

“Having Spirit on board has elevated the work we do to build veterans’ capacity,” says Martha Jackson, director of operations at Goodwill Industries of Greater New York and Northern New Jersey. “Having a veteran as a staff member gives us credibility in veteran communities, working knowledge of issues they face and insight into the best way to solve them.”

Padilla is looking forward to starting his new job at a high-end steakhouse in New York soon. He is ready to move out of the shelter and eager to go back to school. He’s preparing for an exam to become a certified sommelier. He continues to work through his own needs and feels confident he is on the right track.

“In helping others, I am helping myself,” Padilla says. “I am able to see my life in a new light. I foresee how things will change for the better at the end of this program.”

To find out more about or get involved with the Veteran Leader Corps or the Community Blueprint, please contact Janaia DeShields at [email protected]