Through volunteer service, Americans connect with the spirit of unity that arose in the aftermath of 9/11. As Points of Light commemorates the 15th anniversary of 9/11 National Day of Service, we highlight those who have been inspired to give back to their communities. 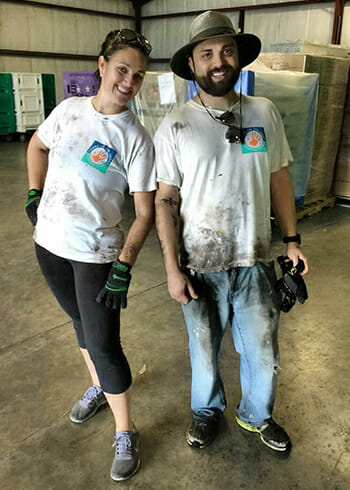 As a veteran of the armed forces, Brittany Chaney has long been dedicated to giving back to those who have served. Like many veterans, Chaney looked to volunteer service upon leaving the military to ease her transition back to civilian life, and became involved in a variety of service projects through Points of Light affiliate Hands On Orlando. Chaney says she enjoys the opportunity to be involved with a lot of causes – her commitment to volunteerism being the driving force behind it all.

“I have a love for volunteering and being involved in the community.” Reflecting on her time in the Navy, Chaney says the military was one more opportunity to give back.

Through her involvement with Hands On Orlando, Chaney, now 33, came across the opportunity to work as a Frontline Families AmeriCorps member.

Through Frontline Families, Chaney and her fellow veteran volunteers have worked supporting organizations like Fairways for Warriors, a group in central Florida that teaches combat veterans how to use golf as a form of therapy; Crossroads Corral, an organization that hosts equine-assisted learning programs where veterans interact with horses to ease the symptoms of PTSD; and Cocktails for a Cause, an annual fundraiser that supports veteran organizations.

As a Frontline Families AmeriCorps member, Chaney has been responsible for coordinating the volunteer efforts of veterans in the local community. Most recently she has been involved in the Booyah Veteran Bus Project which helps disabled veterans get to and from their doctors’ appointments.

Chaney encourages other veterans to get involved. Volunteering “helps you integrate and get involved again,” she says. “It gives you a sense of purpose.” For veterans who are interested in volunteer service, Chaney recommends visiting their local VA to search for opportunities to serve their community.

In honor of 9/11 Day of Service this year, Chaney and other Hands On Orlando volunteers helped plant 25,000 flags outside the Dr. Phillips Center for the Performing Arts in Orlando to honor those who have served. This is one of many projects Hands On Orlando volunteers participated in across the city, not only honoring service men and women, but also memorializing the June terror attack at the Pulse Nightclub.

You can get involved by sharing a story honoring 9/11 first responders or a service member close to you on Twitter or Instagram using #911Day and #HonoringService, and visit our 9/11 Day of Service gallery to see how volunteers nationwide commemorated the 15th anniversary through service.