For the past seven years, teens Charlie Abrams and Jeremy Clark have been passionate about environmental activism, working on and lobbying for bills related to clean energy and carbon cap and trade programs, and testifying before their school board in order to get climate change taught as a man-made fact in Portland Public Schools. Now, they are combining advocacy with another passion of theirs — film — in order to spur change within their Portland community and beyond.

The two have created the organization Affected Generation in order to produce documentaries and short films that not only explain climate change but also provide solutions for the crisis. Along with a team of about four others, Charlie and Jeremy create youth-focused environmental and climate change documentaries in order to inspire others, especially other young people, to join the fight against climate change. Outside of their own organization, the duo also continue to participate in other environmental organizations, lobby legislature and participate in climate protests. 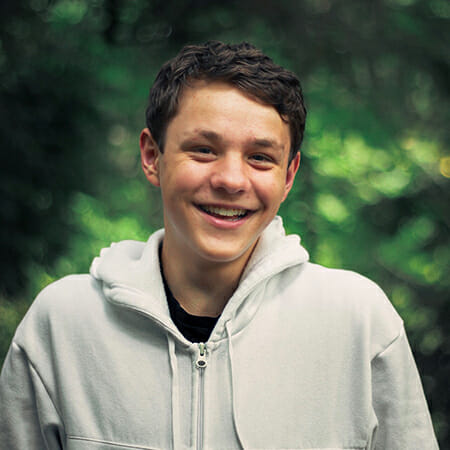 When did you first become passionate about climate change?

Jeremy: When I was in fourth grade, I saw this photo of the Statue of Liberty up to her waist in water and it was kind of a striking image. It made me want to take action because I knew that wasn’t the kind of future I wanted.

Charlie: After hearing Jeremy speak to our class about climate change, we got involved together and started working on smaller actions that we could take, because at this point we were nine years old. We had small actions at that point like starting a blog, joining a climate organization, and then over the past seven years it’s grown to working on carbon pricing bills across the nation, working on a lot of different projects, getting in the field of documentaries and film, and traveling across the world for a variety of different conferences and awards. We’ve done a lot of activism since then.

Why is it important for more people to learn about climate change?

Jeremy: I don’t think enough people realize the true severity of the climate crisis. I don’t think enough people realize that we need to take action now. Because film is such a common medium for people to get their information in this day and age because of the Internet, I think using film is really powerful to inspire people to take action and to help to convey important information about this crisis.

How are you using film to further your activism?

Charlie: We’re working on a carbon pricing documentary. Carbon pricing is something extremely passionate to us. We’ve worked on bills for clean energy jobs and carbon cap and trade programs for I think five years now, so it’s been something we’ve grown up learning about and fighting for. Bringing film into that is something that we’re really passionate about because that’s a large way to bridge the gap between people who don’t know the complex parts of carbon pricing, how it’s implemented, who’s pushing for it. To put that into film is a way that people can connect with, and is an easy way to get information across, and especially in a creative way that can focus on the youth voice and on other issues we’re really passionate about.

We had the largest youth lobby day that Oregon had ever seen for an environmental bill. That was a short film we made and it was something that could teach other youth about and inspire and motivate them. Inspiration has been a large part of any movement, so that was a good way to incorporate film. Now we’re working on a number of other films and documentaries, one about tracking plastic which is a film called ‘Plastic Planet,’ where we’re tracking how plastic is circumnavigating across the globe in different recycling systems, and exposing the ones that aren’t doing their part in recycling and how that correlates to climate change.
Throughout all our work in film and documentaries, we notice that once we combine it with our activism, it is something very strong in itself. Although we would be doing all our advocacy whether or not we made a documentary about it, shooting a documentary and adding film to that just gives another level of inspiration and outreach to people who wouldn’t hear about it in the first place.

Charlie: There’s a lot going on right now. We’re working on a project called Supporting Santiago which is raising medical supplies for the protesters and the injured down in Santiago and other Chilean cities. Because of our friend down in Santiago, we wanted to work with them in creating this project. The largest thing they needed was a lot of media attention and medical supplies, so that’s what we focused on doing.

Another one is ‘Plastic Planet’ which we’re working with a lot of other organizations … That’s a documentary and project about exposing the waste management systems across the globe and how recycling correlates with climate change.

We’re also really working on passing Clean Energy Jobs this year, which is a policy that we’ve been working on for about seven years. We’re also working on getting climate change taught in the PPS [Portland Public Schools] curriculum and trying to expand that into school boards across Oregon and even further, to get climate change a core subject. We’ve worked on that before, to teach over 60,000 kids in PPS the core subject of climate change in in their school curriculum, which has been an ongoing process from our school board’s resistance against passing and education bill funding, and a lot of reasons correlated around climate change and the science behind it.

Charlie: A large part of it I would say isn’t really the awards and prizes and stuff we won. I would say it’s more what we get to learn from those. … We were finalists for the Children’s Climate Prize, and they flew five other finalists from across the globe to Stockholm. Throughout the process of being a finalist for that award, we were able to meet youth from across the globe who were doing similar things and who were having their own affects on the climate crisis and having their solutions being taught throughout the world and seeing what they were doing, working on the same crisis but finding a solution in a completely different way since climate change is such a large issue. Throughout all these awards, conferences and events, we’ve been able to meet all the youth activists who have been bringing their passion to the fight of climate change. I think that’s been the most rewarding thing, meeting those youth and coming up with solutions together and seeing that when we are working together on a crisis like this, it’s easier to get a lot more done, to have large projects with youth from across the globe. That’s what I want to see happen in the future — more youth stepping up and doing projects with each other.

Jeremy: I think the main thing that I’ve learned is persistence. We’ve done a lot of work around policy, especially on this one bill that we’ve been pushing for several years called Clean Energy Jobs. It keeps on failing every year to pass, so I think from that bill especially we’ve learned that in the political world, things don’t always get done as quickly as you would like them to, and with the climate crisis it’s crucial that we do get these things done quickly. It’s also crucial that when things fail, we come back the next year and get it done.

Jeremy: We used to focus a lot on the effects and causes of climate change, but at this point, everyone kind of knows how serious [climate change is]. All the headlines are all just really negative, and the only news that most people get about climate change these days is just another headline about ‘this effect is happening’ or ‘we just discovered another cause for climate change.’ When you keep on hearing those same things over and over again, it’s demotivating and that’s not when change happens. Change happens when people are inspired by seeing solutions for an issue.

Do you want to make a difference in your community like Charlie and Jeremy? Find local volunteer opportunities.