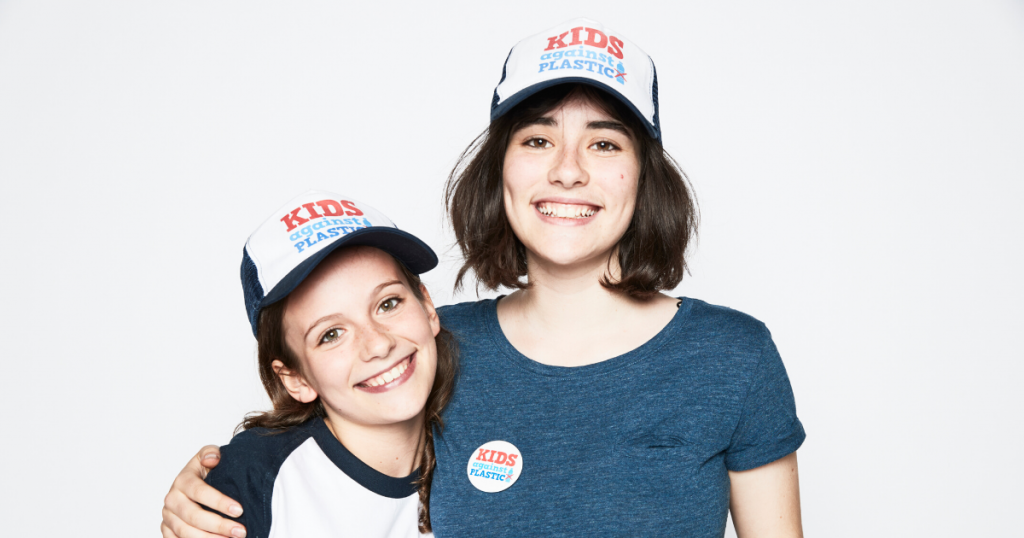 Amy Meek, right, created Kids Against Plastic with her sister Ella, (left) when she was 12 years old and works to bring public awareness to the damages of plastic pollution.

17-year-old Amy Meek has always had a connection with nature, as she grew up in Nottingham, England. She remembers spending a lot of time with her sister Ella and her parents as they took family hiking trips and went on outdoor adventures. Eventually, her connection with the environment turned into a powerful youth movement to protect what she holds so close to her heart.

The Meek sisters couldn’t wait for someone else to do the work of protecting the environment because they believed that there was no guarantee that action would be taken — and that’s when Amy and Ella Meek brought Kids Against Plastic to life in 2016.

The Meek sisters took particular interest in plastic after learning about the UN Sustainable Development Goals, and one in particular had a vision of preventing the damage of plastic pollution — goal number 14: Life Below Water.

Their mission for Kids Against Plastic centers on reducing single use plastic consumption and encouraging individuals, schools and businesses to be more discerning when it comes to the damage that single use plastic can do. Single use plastic is essentially plastic that is used once and then thrown away and cannot be recycled. It ends up on landfills, and is commonly found in the ocean and around the animals that call it home.

Amy believes that the urgency in reducing single use plastic lies in the belief that it’s already proven to damage the environment and sea mammals — and that it will directly affect the future generations of our planet.

“If we don’t take action now to reduce plastic usage, it’s going to be something that we are forced to clean up for hundreds of years,” Amy said. “It’s not going away anytime soon and it looks like young people are going to be left with this massive environmental crisis that we’re going to have to fix despite not being the predominant cause of it,” she added.

First, Amy and Ella marched into a local café with plastic clipboards in hand and educated the staff on ways they could reduce their single use plastic. They continued this outreach in other cafes near Nottingham, and eventually began outreach in schools and other businesses.

Amy created the organization’s Plastic Clever Schools Initiative because she understands that reducing plastic can be initially intimidating, expensive and time consuming. The program is all about making small steps that eventually have a huge impact. These steps include using the main forms of plastic: plastic bottles, cups, lids, straws and bags.

The program has gathered more than 1,000 schools that have partnered with the sisters in making reusable items the new norm. She’s even spoken to the business manager at her own school about reducing plastic usage by supporting reusable lunch boxes, refillable canteens and wooden cutlery.

Amy also wants to see the organization and its volunteers pick up at least 100,000 pieces of plastic litter — one for every sea animal killed by plastic in the oceans every year. They’ve almost hit their goal with 90,000 pieces of litter picked so far.

Although Kids Against Plastic is based in the United Kingdom, Amy designed the organization’s educational resources to be adaptable anywhere around the globe. She believes in cleaning up the community you live in first before pointing fingers at others, and that everyone has a part to play in the global movement of protecting the environment.

Another important component of Kids Against Plastic is young people. Amy is dedicated to encouraging youth around the world to stand up for what they’re passionate about and stand firm in what they believe in. She’s seen youth involvement continue to grow, and the organization’s Kids Against Plastic Club  — an initiative that encourages children to become active against plastic pollution— has reached 100 members.

A source of motivation for Amy and her sister lies in the fact that they no longer have to start educational conversations by telling people why plastic is harmful. They’ve seen attitudes towards plastic, environmentalism and litter have shifted on a global scale since 2016.

They also make it incredibly easy for schools and organizations to find educational resources on reducing plastic usage.

She was mostly at home with her family during the early months of the COVID-19 pandemic and turned a difficult season into an opportunity of growth by digitizing most of Kids Against Plastic’s work. The organization hosted workshops and Zoom conversations online — something Meek had no prior experience in. It’s also been a season of true reflection for Meek.

“It gave us a chance to sit down and think about how we could improve the outreach that we do and how we could better support the young people we work with,” Amy said. “It’s been really great to see something positive come out of this.”

As Amy approaches the end of her secondary education in England, she has dreams of becoming an environmental campaigner or activist. She also finds herself to be more and more passionate about youth engagement.

“It’s not just the environment issues, but also the power that young people have when they stand up to make a difference — no matter what issue it is,” Amy said.