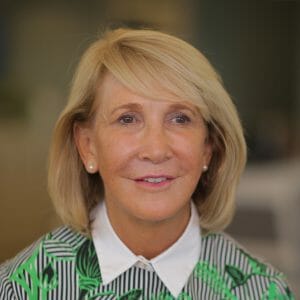 As president of Fidelity Charitable, Pamela Norley is a leading voice in advocating for the power of American philanthropy across the world. Outside of the office, Ms. Norley volunteers her time as vice-chair of the Board of Directors for Points of Light. She also serves on the boards of the U.S. Impact Investing Alliance, Research Triangle Park Foundation and the Flying Kites School Network.

For those not familiar with the concept of philanthropy, what is it? What makes someone a philanthropist?

For many, the term “philanthropy” has traditionally called to mind wealthy families bestowing large endowments on major institutions. But for me, my idea of what it means to be a philanthropist was shaped by my dad.

Donating was second nature to my father, and he had this knack for knowing what people needed and when he could help. When he ran his own business, he made sure all his employees had turkeys at Thanksgiving and Christmas and hams at Easter. And it wasn’t until later that I learned that he anonymously paid off the mortgages of neighbors whose homes were in foreclosure and bought suits for local high school students interviewing for college.

My dad really embodied the original meaning of philanthropy—”love of humanity”—and, luckily for the world, he’s not the only one. Increasingly, we’re finding that people are embracing this much more broad and multifaceted definition.

Recently, donors—particularly those of younger generations—are thinking beyond traditional monetary donations to 501(c)(3) organizations and reframing the concept of philanthropy as any act of social good, whatever form it takes. That could besharing your time through volunteering, using your social media platform to advocate for a cause or changing your consumer habits to better align with your values. To put it simply, anyone sharing their time, talent or treasure to make the world a better place can be a philanthropist. And we’ve really seen this more accessible and inclusive definition resonate with younger donors. In fact, three-quarters of millennial donors say that they consider themselves to be philanthropists, compared to just 35 percent of Baby Boomer donors.

How are the ways in which younger generations, such as millennials and gen Z, make decisions about how and where to make philanthropic contributions changing?

We certainly see younger donors approach their decisions differently than donors of older generations. We see younger donors prioritize contributing to small, innovative organizations where they can easily see the effectiveness of their support. We see peer-to-peer advocacy creating an influencer culture around donating. But this question really goes far beyond how younger generations approach charitable giving and gets at how they approach life.

Younger generations are finding ways to integrate their values around philanthropy into everyday decisions. For their parents or grandparents, donating has often been siloed as an action separate from other aspects of daily life, but younger donors take a more holistic approach. It is now second nature to consider the social benefit of their actions before making a decision. They choose products from brands like Warby Parker, TOMS, or Bombas that incorporate social good into their business models. They leverage major milestones like birthdays and weddings to fundraise for their favorite causes. They consider a company’s corporate social responsibility when deciding whether to take a job offer. And these are just a few examples. Particularly for these generations, it’s no longer about charitable giving; it’s about charitable living.

To me, the greatest lesson from younger generations’ philanthropy is the power of using your voice to increase the power of your dollars. Many older donors don’t want their donating to be visible, which may be related to feelings that anything connected to money should be handled privately. But younger generations understand the power of sharing and making the causes they care about more visible. Even if you aren’t able to afford large donations, you can use your voice to share favorite causes or organizations and to ask for others to support the same issues. Every post and interaction is an opportunity to plug into something bigger and make more of a difference.

Recent research has shown a growing trend by younger generations to donate to individuals versus the organizations themselves. Why is it important for people to also donate to nonprofits?

For many, giving money directly to an individual or family is one of the most tangible ways to support others. With the growing accessibility of online platforms such as GoFundMe, Patreon or DonorsChoose—and younger donors’ strong focus on seeing the demonstrated impact of their donations—it’s no surprise that direct donations are an appealing way to engage in philanthropy.

However, through their on-the-ground experience, nonprofit organizations are centers of knowledge and expertise in addressing the challenges that their communities face. They also may have greater visibility into the populations who leverage their services. Further, unlike one-to-one gifts, nonprofits work at scale to help a greater number of people with a similar donation. For example, Feeding America reports that they are able to provide 10 meals for every $1 donated. This combination of expertise and efficiency enables organizations to set up systems that can transform whole communities.

Finally, while donating directly can make an immediate impact in meeting one individual’s request, the underlying systemic issues that influence those requests continue to go unaddressed. Often, nonprofit organizations not only work to provide direct services, but also advocate for systemic change at the policy level. That scope of work is much more difficult to organize and manage on the individual level.

How can donating be a pathway to deeper civic engagement (volunteering, using your voice, etc.)?

Above all, I hope donors understand the full breadth of ways that they can make an impact on the world. Sometimes it starts with just one donation, sometimes with a vote, sometimes with a simple ”like” on social media. All of these are great entry points to making more of a difference, and they can build on each other over time.

I’m reminded of Fidelity Charitable donors Peter and Kendra Amico. They believe that passion for a cause should inspire your donations, but that the opposite is also true. In addition to donating to causes that they care deeply about—those that are top of mind and heart because of a direct experience—they also give to causes that they want to care more about, including issues outside of their experience and maybe their imagination.

When you put your money toward something, you begin to care more about it and become personally invested in progress in that area. And that new passion can be the inspiration needed to engage more deeply, through volunteering and speaking up for those who need your voice even when it’s tiring or difficult.