George A. Kalogridis is a C-suite executive with an accomplished career leading a Fortune 100 business around the globe. With 50 years of experience, George’s legacy is his ability to create an environment to deliver a best-in-class level of excellence. Throughout his career, George has cultivated strategic partnerships across The Americas, Asia, and Europe, and together with a diverse group of colleagues and thinkers, he has set the bar for delivering unparalleled products and services.

George has led teams of 70,000+ and managed businesses driving over $13 billion in revenue through his unique approach of stretching creativity to inspire teams to deliver an exceptional customer experience. Under his leadership as a transformational leader, Disney Springs was reimagined, a variety of hotels opened and were transformed, creative transportation alternatives such as Disney’s Skyliner launched, My Magic Plus was introduced, and a host of new attractions, rides, and shows were created for millions of guests who visited each year.

George’s depth of experience throughout his career placed him in one of the most visible positions in the Company’s history as the Global Ambassador for Walt Disney World Resort’s 50th Anniversary Celebration. George has been awarded the highest honor Disney bestows upon a leader by creating a window on Main Street at the Magic Kingdom. The Orlando Business Journal acknowledged George as among the most influential executives in Central Florida, Central Florida Hotel and Lodging Association honored him with the Charles Andres Memorial Hospitality Award, the highest honor awarded within the association, and Out & Equal honored him with their highest accolade: the Lifetime Achievement Award.

As an active member of the community, George continues to serve as a leader on several boards including the onePULSE Foundation, Florida Council of 100, and Points of Light. 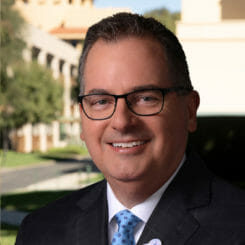