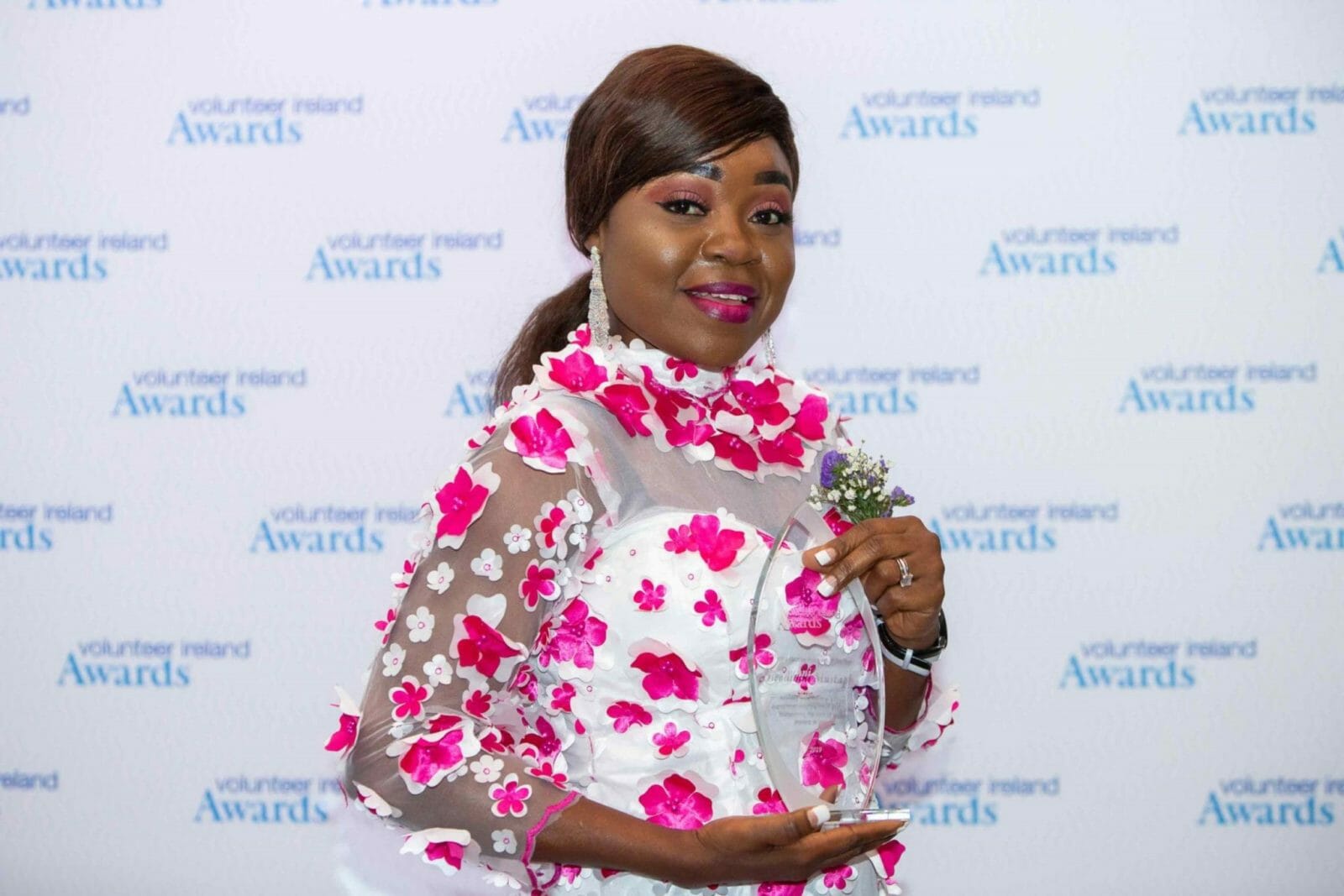 Ola Mustapha accepts the 2019 Christine Buckley Volunteer of the Year Award, celebrating her social inclusion service throughout the Ballyhaunis community.

Once Owodunni “Ola” Mustapha arrived in Ireland after seeking asylum from an abusive environment in Nigeria, she became a force of inspiration for her community. She is currently a resident of five years at the Direct Provision Centre in Ballyhaunis, County Mayo, and is committed to building herself and her community up to ensure human and civil rights to all. Ola quickly became a leading volunteer at her local asylum seeker centre, and continues to help others rise in her community and throughout Ireland.

Direct provision centres make up a system of asylum seeker accommodations in Ireland that aim to meet basic needs, such as providing food and shelter to individuals as they wait for their claims of refugee status to be completed. The intent of the direct provision centres is to shelter asylum seekers for a period of six months, but according to Ola, some individuals stay for eight to nine years.

In the midst of uncertainty and vulnerability in these shelters, Ola chose to volunteer. Her commitment to empowering others to claim their basic human and civil rights is relentless; after several attempts to mobilize women with similar backgrounds and adversities in her shelter, Ola succeeded. She brings together groups of women who live in the Ballyhaunis centre to plan inclusion and integration projects within their centre and to build bridges between asylum seekers and the local community.

Her efforts eventually became the Ballyhaunis Inclusion Project, which has grown to empower the lives of women beyond Ola’s personal centre. “People find relief in coming together as one group,” said Ola. “We face one struggle, the same situations, and we can discuss our issues as an empowered, solidified family-like unit.”

One of her goals is to give people the flexibility to live the lives that they want instead of living in the mindset of being a prisoner. According to Ola, you don’t have to live in the Ballyhaunis centre to volunteer. People from the community have opportunities to get involved, like coming to the shelter to give asylum seekers free English classes.

When asked how she found her voice and passion for inclusion, Ola reflects on the strength she found while overcoming domestic violence. When she arrived in Ireland, she uncovered a breath of fresh air that was inspired by the new life she wanted to create for herself and for her children. In fact, one of Ola’s first experiences with a volunteer involved her children. Ola’s two-year-old son has special needs, but she had never heard of autism prior to arriving in Ireland. She met a volunteer who helped her understand autism, and they changed her perception of volunteering. Ola realized that such interactions create a sense of belonging, appreciation and value.

In addition to spearheading volunteer efforts at the Ballyhaunis centre, Ola volunteers with Mayo Intercultural Action, an organization dedicated to promoting the positive effects of interculturalism in Irish Society. Here, she works towards creating a society where human rights and cultural differences are respected and valued. Ola is also a major link between asylum seekers at her shelter and valuable refugee policy information that Mayo Intercultural Action provides. She keeps individuals updated on the evolving policy that refugees must know once they arrive in Ireland.

Ola’s mission-oriented heart has not gone unnoticed. A fellow volunteer at Mayo Intercultural Action introduced her to Volunteer Ireland, a Points of Light Global Network affiliate helping individuals contribute to building resilient communities, where she was nominated for multiple awards that honored her dedication to social inclusion. Due to her prominent voice in her community, Ola was named the 2019 Christine Buckley Volunteer of the Year, an award that celebrates her resilience and tremendous compassion.

One of Ola’s favorite experiences as a volunteer has been the simple, yet immensely significant, role of spreading the news. “So many women and individuals don’t know what the system is about. It’s easy to assume that initially being housed and funded will last, but there’s so much more that we need to know,” Ola said. She continues to advocate that seeking asylum is a foundational human right, and that asylum seekers are not responsible for the institutional systems that may not operate efficiently.

She believes that it’s important for people around the world to give back because if knowledge and skills are kept hidden, there is a missed opportunity to pass valuable wisdom to other people in need. Ola acknowledges that there are many stereotypes and prejudices around people going through the asylum seeker process, but she knows that life should not be lived in such a way.

“Do not follow the stereotypes people create for you just because you are a person of color or a migrant,” said Ola. “Do not kill your passion just because someone told you that this job is the only thing you can do after arriving in the country.” Because of advocates like Ola, perceptions of refugees are slowly improving across her community.

When asked what she has learned as a volunteer, Ola reflects on her personal journey at becoming self-sufficient. People cannot always stand alone and sit behind closed doors, Ola highlights. Becoming stagnant is never a solution to creating a positive change.

Ola’s future is nothing but radiant. “Do not give up on yourself,” said Ola. “Be an example, and constantly rediscover your capabilities as a difference maker.”