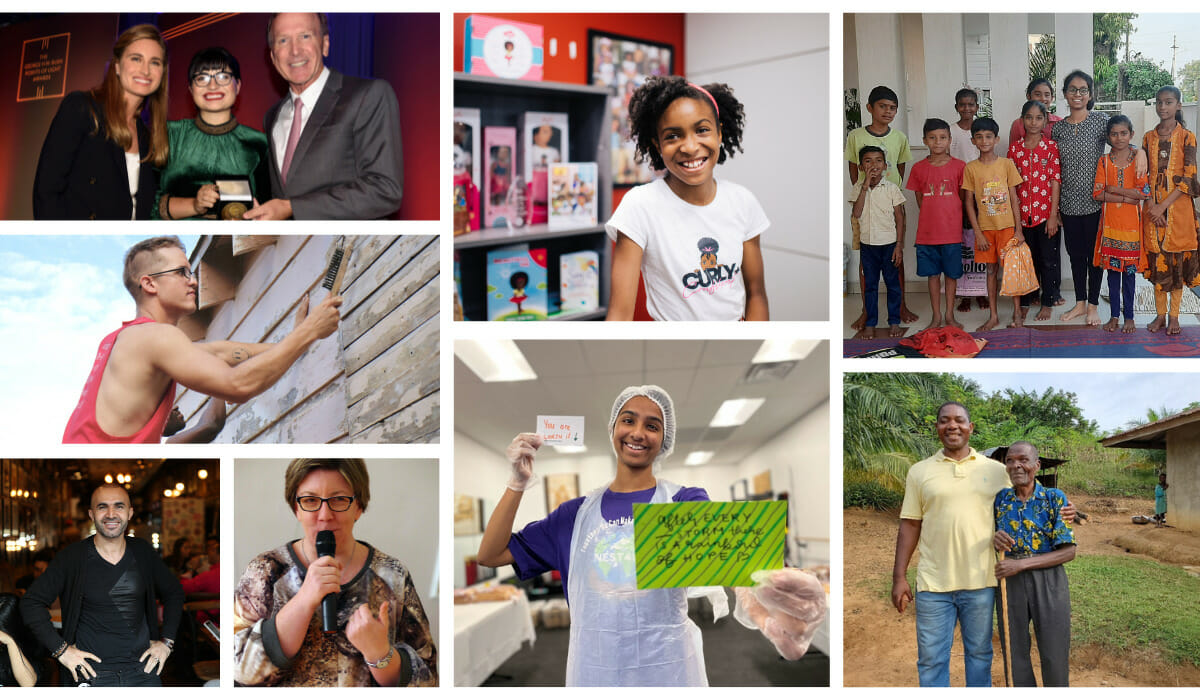 Each year, the Points of Light Inspiration Honor Roll celebrates acts of service, kindness and civic engagement from individuals who create change in communities around the world. It recognizes the people who are changing the world, in both large and small ways, to improve the lives of others.

This year, we’ve continued to see individuals step up in their spheres of influence, making impactful contributions with their time, talent and energy. More people are volunteering, using their voices, giving back through work and taking action when they see a need.

We’re excited to uplift these stories and show how in communities worldwide, the power of people continues to drive us forward. Meet a few of our incredible Spotlights and get inspired to take action in your community!

When it comes to the Points of Light Civic Circle element of Work, president of Points of Light Global Network affiliate and Polish non-governmental organization Centrum Wolontariatu, Agnieszka Lissowska-Lewkowicz, is navigating it with skill. Besides making an impact through the nonprofit she oversees, she has brought compassion and community into her home.

From the start of the war in Ukraine, Agnieszka and her family knew they wanted to help. They began to consider hosting a displaced family but were unsure of what that truly meant in terms of the length of the commitment and how it would influence their home life. Then Agnieszka received a call from a friend who asked if she might consider welcoming the mother and daughter into her home.

Social entrepreneurs identify needs that have not yet been met by traditional institutions, structures or systems, and lead creative and innovative solutions that drive change. Ten-year-old Zoe Oli is the CEO of Beautiful Curly Me, a company making Black and biracial skin-toned dolls with natural-looking hair, including afros and braids.

Anyone can also purchase a doll and gift one to a girl who may need it. Zoe’s company has empowered Black girls across the nation with dolls that look just like them, because representation matters, starting with childhood.

Of course, an important part of leading a civically engaged life is through volunteering. Harry Kpoh witnessed the ravages of civil war while living in Liberia, and when he was able to immigrate to the United States as a young man, those memories of suffering stayed with him. So he decided to start what is now the Trembo National Association of the Americas, Inc. (TRENAA), from his home in Louisville, Ky.

This organization is dedicated to addressing Liberia’s critical need for life-saving medicine, medical equipment and food. Plus, Harry travels on every container that goes to Liberia.

Texas airman Dustin Brooks is a shining example of service. Dustin has been actively volunteering for over eight years, and since 2019, he has been volunteering with the Dyess We Care Team organization based at the Dyess Air Force Base in Texas. Before that time, he spent five years as a volunteer with Aramark/Sodexo creating free meals for people who were underserved.

Dustin’s current duties as inventory manager ensure the organization has all the supplies on hand to paint houses and provide minor repairs. Between military service, community service and family life, Dustin is an exemplary citizen in his engagement.

Rose Wilson knows a thing or two about the importance of listening and learning. She is a trailblazer whose accomplishments have left a lasting impact on the Lubbock community. Elected in 1978, she was the first African American woman to become president of the Lubbock NAACP.

She, along with other community leaders, advocated for North and East Lubbock to have representation in city government by spurring Lubbock to adopt single-member districts in 1984. Her advocacy paved the way for minorities to be elected to Lubbock City Council. Through honoring the lived experiences of Black people and advocating for equality, we’re inspired by Rose’s story.

Meet all of the Points of Light Inspiration Spotlights

Want to learn how you can leverage civic engagement using all nine elements of the Points of Light Civic Circle? Start by listening and learning and then learn how to use your purchase power, your voice, your vote and more to drive real, sustainable change in your community.